Did your mother ever work at the palace? 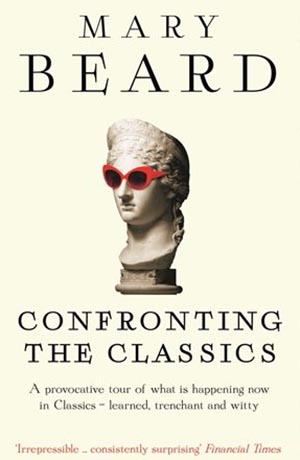 The Emperor Augustus, ruler of the known world, once spotted a man in the street who looked a bit like himself. ‘Did your mother ever work at the palace?’ he asked him roguishly. ‘No,’ the man replied, ‘but my father did.’ Augustus could have had the man killed for this scurrilous (and slightly surreal) insinuation, but fortunately he had a sense of humour.

As too, Mary Beard tells us, did the Emperor Elagabalus, who used to seat his dinner guests on cushions that, unbeknownst to them, were full of air. As the meal progressed, a slave secretly let the air out, so Elagabalus could enjoy the sight of his companions subsiding, until they slid beneath the table.

While sharing the first of these anecdotes in Confronting the Classics, the author praises Augustus for his ability to laugh at himself. Yet there’s little doubt where her real sympathies lie — here, as elsewhere, they’re with the man in the street. Professor of Classics at Cambridge, literary journalist and TV presenter, Beard has several professional modes, but all favour what she calls a ‘bottom-up’ approach to her subject. Writing about Ancient Rome, for instance, she focuses less on the palaces and pavilions of the mighty than on the bars and bordellos of the meek. More generally, she challenges orthodoxy, with often exhilarating results.

In her chapter on Boadicea, she mentions the account in which it was the British queen’s flogging by Romans that prompted her revenge. But she also gives space to Cassius Dio’s version, whereby the rebellion was caused by economic crisis. According to Dio, Boadicea’s soldiers cut off the breasts of Roman women and sewed them into their mouths. Why? So they’d look as if they were eating them. ‘Even the most glamorous rebels,’ Beard concludes, ‘are just as unappealing, under the surface, as the imperialist tyrants themselves.’

Yet in her world view, tyrants too deserve a rational appraisal. When Caligula made his horse consul, she says, it wasn’t necessarily madness. He may have been making a satirical point, implying his horse could do as good a job as the asses surrounding him.

Alexander the Great comes off less well — as a drunken, psychotic child. Some have called this verdict anachronistic, reflecting Beard’s modern mindset, but as she points out, it can’t entirely be dismissed as such, when one reflects that a similar view was expressed by Lucan, for one. ‘It is, of course, a general rule,’ she remarks, ‘that historians accuse each other of making anachronistic judgments only when they do not share the judgment concerned.’

It might equally be noted, of course, that when an author writes ‘of course’, it’s usually because they’re about to make a rash generalisation. I know this because I’ve done it, writing book reviews. And book reviews, it must be stressed, are what this book is. Beard would say she hasn’t tried to disguise that fact. Her publishers have. The word ‘review’ appears nowhere on the cover of Confronting the Classics, which uses the word ‘tour’ on its front, and ‘manifesto’ on its back (which is pushing it). In her preface, Beard writes:

It is fitting that all the chapters of this book are adapted and updated from reviews and essays that have appeared over the last couple of decades in the London Review of Books, the New York Review of Books or the Times Literary Supplement.

Fine — but first of all, the phrase ‘reviews and essays’ is a fudge. Except for the introduction, every one of the 31 chapters here originated as a book review (and the intro was a lecture, not an essay). And secondly, in what sense is it ‘fitting’? Beard explains, ‘reviews have long been one of the most important places where classical debates take place’. I’m still struggling with ‘fitting’.

In her afterword, she returns to the fray: ‘I am very pleased to remind you that each of the chapters in this book originated in an essay or review.’ Is that really the case? Very pleased? The reason why this matters is because it raises the question of what reviews are for. Beard’s answer, in part, is they’re a ‘quality-control mechanism’ designed to point out errors of fact. But what she doesn’t add is that their aim is also to let the reader know what type of book is being reviewed, and when authors are getting above themselves.

In many of these pieces, in reviewer mode, Beard does this extremely well. She is, if you like, a kind of literary Elagabalus, who delights in watching the air escape from beneath her more pompous peers. But she isn’t — or not here, at least — an Augustus.