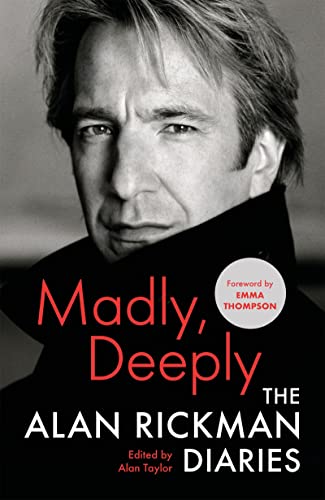 There’s a widespread tendency to mistake actors for interesting people. In reality, of course, they are often no more interesting than someone with a knack for mimickry, like the old friend who insists on doing pitch-perfect Alan Partridge impersonations. It seems funny, but is it really? One exception to the general rule is the late Alan Rickman.

True, his diaries have been handicapped by a slightly dubious title. (I might have suggested ‘Alan, Actually’, or even, given how often he ate in restaurants, ‘Dine Hard’.) Rickman doesn’t seem to have been remotely mad, although he did play his fair share of sickos and psychos (Rasputin, for instance, and the Sheriff of Nottingham). Over the course of 480 pages, he comes across as more like a combination of the artistic Jamie in Truly, Madly, Deeply (the justification for the book’s title) and the sardonic Severus Snape he plays in the Harry Potter films.

For anyone with a sneaker for the man and his work, these diaries are a delight. For one thing, they’re filled with his acerbic verdicts on the films and plays he sees. Vicky Cristina Barcelona he dismisses as ‘Woman’s Weekly tosh’, which seems about right. He’s no fan of the over-praised Last Seduction, noting that ‘an espresso is more rewarding’. As for Marvin’s Room, he complains it’s ‘another of those American plays which insist that you feel something’, before adding wryly, ‘I don’t think anger & frustration is what they had in mind.’

There are also two or three terrific anecdotes involving the glittering cast list of his friends and acquaintances. I loved Rupert Everett’s dry reply to Ruby Wax’s question about how his career is going: ‘Endlessly clawing my way back to the middle.’ Better still is Rickman’s own riposte when John Major approaches him in the stands at the 2011 Wimbledon men’s final. ‘You have given us so much enjoyment,’ gushes the former Tory prime minister. To which Rickman, a lifelong Labour supporter, cannot resist replying, ‘I wish I could say the same of you.’

As the editor, Alan Taylor, reveals in his introduction, there’s no especial reason to think that the actor intended these diaries for publication. This turns out to be at once a strength and a weakness. It’s a weakness because there are no real set pieces or themes. The diaries he wrote in provided only one page per day, making this volume feel bitty to read.

It’s a strength because he never seems to be performing. The man who emerges is one who takes his work seriously and believes the key to it is striking a balance between doing the preparation and, when the time arrives, snatching back spontaneity. Repeatedly, whether it’s Helen Mirren or Ralph Fiennes he’s praising, he singles out the freedom of their performances.

Outside acting, the equivalent compliment is ‘curiosity’, which is a type of freedom. He uses ‘curious’ or ‘curiosity’ as a term of approval twenty-seven times over the course of the book. Every now and then, when he notes the lack of it in a friend or a colleague, one can’t help wondering if what frustrates him is that they don’t seem sufficiently curious about Alan Rickman.

There are flashes of vanity, and even envy, as when Jonathan Pryce wins the best actor gong at Cannes for his turn as Lytton Strachey, a role Rickman had turned down. It may just be me, but these seem the most forgivable of flaws, particularly when they’re placed alongside his other traits of kindness, affection for friends and – his own gold standard – curiosity.

How about that other criterion? Did he act ‘freely’? Anyone who doubts it should seek out The Song of Lunch, a 48-minute dramatisation of a narrative poem by Christopher Reid. Rickman plays a frustrated book publisher meeting an old flame (played by Emma Thompson) in a third-rate Italian restaurant. For long stretches, the camera just rests on his face. He’s superb.

The story goes that, when Rickman was playing the villainous Hans Gruber in Die Hard and had to fall to his death at the end, they told him they were going to count to three and then drop him. In the event, they dropped him on three, instead of after it. Hence the look of genuine surprise as he falls. I suppose that, more often than not, this is the way death comes.

These diaries are dotted not only with dinners, but also with deaths, first of family, then friends. In July 2015, he himself is diagnosed with pancreatic cancer and observes that this is now ‘a different kind of diary’. The entries immediately become shorter and are soon reduced to a sequence of doctor’s appointments.

Rickman died on 14 January 2016, not far short of his seventieth birthday. At his funeral, his friends and his widow, Rima, with whom he had been in a relationship since his teens, sang ‘The Sun Ain’t Gonna Shine Anymore’, the Walker Brothers classic that he and Juliet Stevenson had belted out, sublimely off key, in the best scene of Truly, Madly, Deeply.