I’m in danger of becoming a flat-mind bore 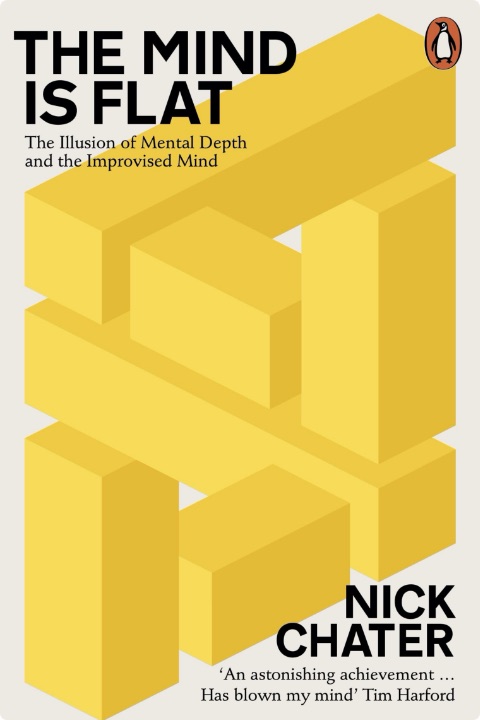 Reading The Mind is Flat is like watching The Truman Show and realising, while you’re watching it, that you are Truman. For anyone who hasn’t seen the movie, this is Peter Weir’s 1998 fable in which Jim Carrey discovers he is unwittingly the star of the most successful reality-TV show on the planet. His world is a film set and everything that happens to him has been plotted by a brilliant if somewhat pretentious director named Christof.

Truman has this thunderbolt moment. It’s part Aristotelian anagnorisis, which is to say the realisation of something horrific, and part Camusian absurdity. But at the same time, it’s incredibly liberating. He sees that he can do whatever he wants.

If you buy into Nick Chater’s adventure in neuropsychology, you’ll experience all these things and more. Because you’ll realise that you’re not only Truman. You’re Christof too. Or, to be precise, your mind is Christof and the way you experience the world is Truman. To be more precise, although your mind is like a director, plotting as you go, it might not be a pretentious one. It might be a sitcom director or kitchen sink specialist. But one thing’s for sure: it’s brilliant.

It must be, because it’s had you fooled for so long. It’s had you thinking that you have a pretty clear vision of the way things are, when in fact your vision is anything but clear. That’s also literally true, as Chater demonstrates in his chapters on the workings of the human eye. Because it turns out that what we actually see at any given moment is only a small area of focus. And then we ‘Photoshop in’ the background in rushed and blurry brushstrokes.

I’ll give you a mundane example. Did you ever come across the series of Where’s Wally? books as a child? Each page depicts a crowd scene, among which, somewhere, is a bespectacled plonker wearing a stripy jumper and matching bobble hat. The challenge is to spot Wally as quickly as possible. And sometimes you spot him quickly. But sometimes it takes ages. And the reason for that is that, unless you look at Wally directly, he’s actually invisible.

This isn’t just about blind spots. It’s about systemic blindness, of a kind that’s central not only to the way we see, but also to the way we think. As with vision, so with thought. We have the illusion of clarity and completeness, but in fact we’re locking on to one detail, and Photoshopping in the background. If Chater is right about this, and its ramifications, then just about everything we know is wrong. We’ll be forced, for example, to deny the existence of a subconscious, and call into question the authority of our emotions, and ideas of our own character, and of character in general.

This is complicated stuff, rendered all the more so by its self-referentiality. Chater is turning our mental microscope on itself. If the lens has flaws, might they prevent us seeing them? In his most exhilarating section, he argues that the mind is a mythomane. That’s to say, it’s a brilliant if myopic story-generating machine: half-Borges, half-Walter Mitty. This sounds true. But if it is, couldn’t Chater’s thesis merely be its latest confabulation? Isn’t that actually likely to be the case?

Nevertheless, this seems to be the point we’ve reached. The author is professor of behavioural science at Warwick Business School. I take it on trust when he declares that his counterintuitive theory is one that has been ‘coalescing in many areas of the cognitive and brain sciences over the past few decades’. And I look to his colleagues or more qualified compeers to flag it up if that’s not so. What I can say with confidence is that Chater writes extremely well.

His easeful prose takes its place in the humane, Humean tradition of British empiricist philosophy, moving with clarity and composure towards its revolutionary goal. It’s a triumph in itself that he has written a book about cognition that is as gripping as a thriller. I’m serious about this. You feel compelled to turn the pages to find out how it ends.

In fact, I would go even further. If you can measure a book by how often you find yourself bringing it up in conversation, then The Mind is Flat is one of the best I’ve ever read. My interest is so consuming, I’ve become something of a flat-mind bore. My friends and family are starting to drift away. I see people ducking down side alleys at my approach. Dashing into traffic. Concealing themselves in wheelie bins. They know I’m going to bring it up again.