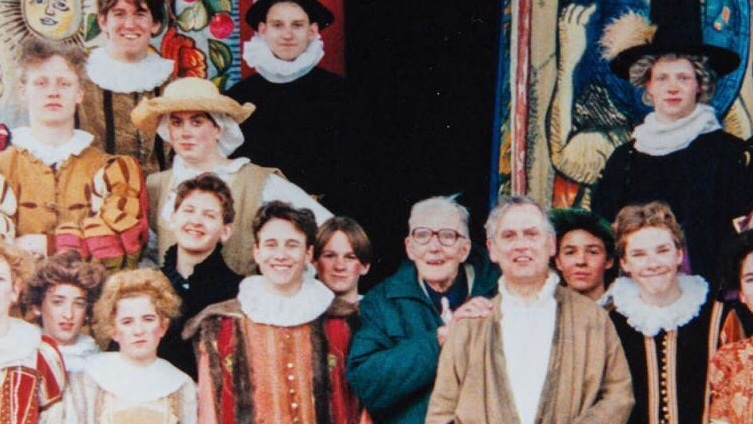 Back in the brutal, joyless early 1990s, when we put on plays at Harrow School, all the female parts were done by boys. Of course they were. There were no girls. Then, as now, the school signed up to the mind-buckling notion that teenage boys, at the white-knuckle apex of their sexual appetites, should be corralled to take part in sweaty contact sports and perform opposite one another on stage in fervid romantic dramas.

Consider A Midsummer Night’s Dream, whose main characters are called Puck and Bottom — enough to give you a general idea of the basic themes. It was in rehearsals for this Shakespearean fantasy that I first clapped eyes on a tiny scrap of pubescence whose name, I later learnt, was Benedict Cumberbatch.

It was about 1990. I was playing Hippolyta, a part that essentially required me to speak in a very silly voice (this played to my strengths) and sport a hat that resembled a large, embroidered dildo (ditto). Ben, a year younger than me, was Titania, queen of the fairies. Now, on the face of it, that’s a hospital pass of a role, a real stinker. You can just imagine the exchange in the dining hall with some simian sixth-former, biceps like bagpipes and shaving three times a day. “Oy, Cumberbatch! What’s your part in the school play, then?” Ben (squeakily): “Erm, well, you see, aha, yes…” Coughs.

Yet, the way I remember it, he was extraordinary as Titania. Even now, I can call to mind a certain laugh he did to accompany the lines “When we have laugh’d to see the sails conceive / And grow big-bellied with the wanton wind”. He slotted it in, a spontaneous, lilting overflow of mirth, between “when” and “we”, and it seemed so natural and was delivered with such grace, you’d have thought this kid was literally from another planet. He must have been about 13. And he was very, very small.

A Midsummer Night’s Dream was a play about sexual confusion, and I guess we were all pretty confused, one way or another. I remember a close friend of mine, Tom Leveritt (now a painter), falling in love with the actor playing Antigone in a production of Sophocles’s tragedy, on the assumption that he was female. Imagine his melee of feelings, a few days later, when he spotted the boy in question, an intense, mop-haired chap named Toby Dantzic (now training as a therapist), slouching along the street in blazer and straw hat, with a clutch of books.

Ben was small, with cubist features —like something sketched by Picasso on a tablecloth after a heavy lunch — and an odd tic, a backward turn to his mouth, giving his words the lightest hint of a lisp, which he retains to this day. To most, he must have seemed a little precious.

There was the time we were heading into London on some school trip. It must have been in 1992, because Ben, Nick Luck (now a sports commentator) and I were discussing Kenneth Branagh’s recent stage production of Hamlet. An older boy (now in real estate), seated a few rows ahead on the coach, declared that he had been so bored by Branagh’s take on the Dane, he had spent most of it asleep. Ben, a bit larger by then, was outraged. Like Tom Brown standing up to some cultural Flashman, he called him out as a philistine.

A luvvie in the making? Sure. A bit pretentious pour un jeune garçon? Peut-être. We all tittered, and some may titter still. But probably not quite as hard, now that Ben is Oscar-nominated, famous as fiction’s finest detective in the BBC’s Sherlock, and currently wielding his own version of Shakespeare’s greatest, fullest, most manifold and moving role at the Barbican in London. And even then, on that coach, I secretly admired him for loving something and being brave enough to admit to it and defend it.

A little un-English, such shameless enthusiasm. Certainly un-Harrovian. These things go in phases, no doubt, but Harrow in those days was a dystopian backwater, static and anti-meritocratic: a blighted Elsinore, with 100 Claudiuses for every Hamlet. If, on stage now, Ben wants to remember what it’s like to be the only one who cares, in a world of cringers and criminals, he need only look back to his schooldays. But don’t think that I’m ungrateful. A few bright spots linger.

There was a scurrilous satirical magazine called Goulash, to which Ben, Leveritt (the confused painter) and I, and no doubt Dantzic and Luck, contributed. There was the fact that Byron had been there: the mad, bad baron, who, with his bouquet of hair and long Regency coats, must surely have had an influence on Ben’s anomic, angular Sherlock. And there was the school’s wonderful tradition of performing Shakespeare’s plays.

This was upheld by a delightful elderly teacher who resembled an elegant frog and rejoiced in the unimprovable name of Jeremy Lemmon. Contemporary dress? No, it was all dusty tights and ruffs, moth-eaten brocades bearing the stains of ages past. In other words, enormous fun.

Obviously, it would have been much cooler if girls had been involved, but at least the awkward sight of boys in make-up and push-up bras had the musty air of authenticity: that was the way things were done in Shakespeare’s day. The line “Frailty, thy name is woman!” must have carried a second sting on a stage without a woman in sight. All the more so in the absence of anyone, of either gender, who was over 18.

I’ve read somewhere that Ben was given the chance to play Hamlet at Harrow, but turned it down in order to concentrate on his A-levels. I don’t remember that. What I do remember is that, in 1994, he played the roister-doistering lead role of Petruchio in a school production of The Taming of the Shrew: more merry misogyny from the pun-happy swan of Avon.

I was in that production, too: this time, playing one of three “Gentlemen”. It wasn’t a pivotal role. My main task was to stand around in an orange doublet (see pic, which also reveals the comedy hairstyle I was sporting at the time) and emit a manly laugh whenever anyone said anything. For some reason, I couldn’t get this right. When I tried, it was like I was merely shouting the words “Ha-ha-ha”. I just sounded angry.

We got the chance to perform the play at the South Bank’s Globe theatre (before the official opening), thanks to Lemmon’s friendship with the institution’s founder, Sam Wanamaker. The actress Joanna Lumley, I remember, was in the audience. And there I was, barking like a hyena. Clearly, my forced hilarity had nothing on Ben’s musical chuckle as Titania. Equally clearly, I didn’t have what it took to make it as an actor. The question was: did Ben?

The roles of Sherlock Holmes and Hamlet, Prince of Denmark, have some obvious traits in common. They are both outsiders, their sensibilities more tightly tuned than those of the thugs and dunces around them. (Hamlet, remember, also has a crime to solve.) They are both, in their different ways, histrionic. Sherlock has his props, his pipe and deerstalker, while Hamlet spends much of the time “acting” crazy, and even produces and directs a play to catch out Claudius. They’re both uneasy around women, preferring the company of their respective right-hand men, Dr Watson and Horatio. What I’m trying to say is, in a manner of speaking, they are both talented Harrovians.

If Ben nails it at the Barbican this season, he will have cause to be grateful to Harrow for more than its thespian tradition. He will owe a hat-tip, too, to its shadows and anarchy. And if anyone doesn’t fully get my meaning, watch Malcolm McDowell’s performance in Lindsay Anderson’s If…, which makes the argument with more articulacy than I could muster.     To return, finally, to the Globe, and that question that did the rounds in the summer of 1994: did Cumberbatch have a future as an actor? Funnily enough, among us cognoscenti, it was widely held that something mannered had crept into his performances, as he leapt around the stage as Petruchio and did everything he could to torment his leading lady (played by Nick Luck in provocative drag). There was a younger boy named Tom Hanbury — taller, better-looking and with a slightly sad or soulful expression — who, we iconoclasts suggested, might, just possibly, be the more gifted actor. Tom is now an art consultant.