A smashing time in Corfu 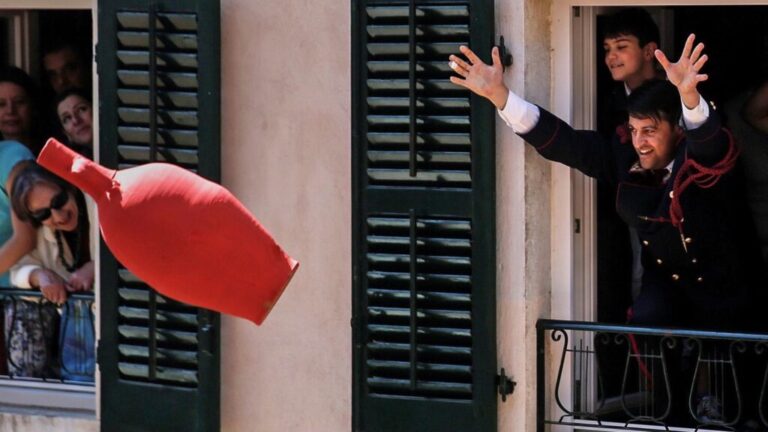 Bang. The first pot falls, dropping from a fifth-floor window. As it hits the cobbled, cordoned-off street, it detonates like a gun. Others follow, toppled from the balconies of the palazzos. Pretty soon it becomes a fusillade of plummeting pots, accompanied by flying ceramic shards, screams and cheers.

This is the pot-smashing ceremony that takes place every year during Greek Orthodox Easter on the island of Corfu. Some say it’s a symbolic rejection of the evil spirit of Judas. Some believe it’s about renewal, and related to an older, non-Christian tradition. Whichever it is, it’s a great excuse to break stuff.

Your Greek holiday plans may be focused on the summer, but you really don’t have to wait that long. Corfu at Easter can be a balmy 19C, and you can add a couple of degrees for the enthusiasm with which the locals launch themselves into the festivities. Wonderful Corfu Town comes into its own.

On Good Friday — April 6 this year, a week later than ours — the old town is woken by church bells and the twittering of thousands of swifts and swallows that swoop over the rooftops. Throughout the afternoon, the island’s many orchestras (Corfu has a musical tradition like nowhere else in Greece) process through the streets. All are dressed to the nines, sporting magnificent plumed helmets and colour-coordinated military regalia.

It isn’t quite a battle of the bands, but there’s a friendly rivalry that reaches a climax in the evening. The Old Band (red) play Albinoni’s Adagio. The Mantzaros (blue) play Verdi’s Marcia Funebre. And the Capodistrias — named after Corfu’s most famous son, the first head of state of Greece — play Chopin’s Marche Funèbre. It’s soul-stirring stuff.

For the Greeks, Easter is bigger than Christmas. And Easter Saturday is bigger than Easter Sunday. The main business of the morning begins at 9am, when the mummified body of the island’s patron saint is paraded through town. What St Spyridon has to do with Easter is a mystery. But that doesn’t matter. He is loved by the Corfiots and out he comes. A Greek friend told me her faith was reignited one Easter by a glimpse of the corpse. She was awed by how little damage 16 centuries had wreaked upon his black and wizened face.

Later, watching the pot-smashing, I’m amazed at the insouciance of one middle-aged Greek man. He stands just within the Liston, a colonnade of cafes at the front of town, sipping a coffee — apparently unmoved by how close these falling pots are to braining him.

That evening, I go to a party in a palazzo apartment above the Liston. Its balconies are the perfect spot from which to watch proceedings. At midnight, a flame of miraculously self-igniting Holy Fire, flown in from Jerusalem, arrives at the music pavilion. The crowds press close in the darkness. Those nearest light their lampada (holy candle) from the flame. They then turn and light the lampada of those nearest to them. Within moments the square is a galaxy of flickering lights.

“Christos anesti,” says the woman standing next to me — Christ is risen. “Alithos anesti,” I reply — truly He is risen — following the custom.

The sky goes mad with fireworks. Amid the shattering chandeliers of light, I can see the great cross standing proud atop the Old Fortress. The woman beside me observes that this is merely a telecommunications mast. I’m not sure I believe it — and don’t really care. Easter in Corfu is a happy mix of the sacred and the profane. It’s either and both at the same time.