How Bond beat the Soviets 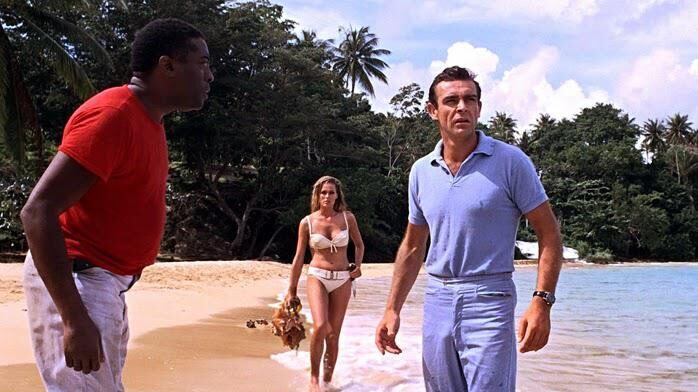 In May 1962 the Soviet Union declared war on 007. The Russian state newspaper Izvestia ran a full-page attack on the first James Bond film, which was then being shot in Jamaica. In the article, the main characters in Dr No were described as a “maniac with a screw loose”, a broken-nosed beauty who likes “to collect seashells in the nude” and “a great detective” by the name of James Bond. The piece was written in a tone of open contempt, demanding to know who could be “interested in such rubbish”.

The answer, it turned out, was quite a lot of people. After the film’s release, Bond became a global phenomenon. But the real question is: why had Izvestia been so interested in it?

The explanation is provided by a brilliant new book by James Fleming, the nephew of the Bond author Ian Fleming. Bond Behind the Iron Curtain takes the reader back to the original culture wars, when the US faced off against the USSR, with each side demonising the other. Specifically, James Fleming zeroes in on how the Bond books and films, with their fast cars, faster women and amoral, polyamorous hero who kills without remorse, became a symbol of everything the East hated about the West.

This is why the Izvestia article didn’t merely attack Dr No the movie. It attacked the book behind it, its readers and, above all, its author. Fans of Bond were like drug addicts. The book was “trash”, pro-American propaganda, churned out by “a retired spy who has turned mediocre writer”.

Nevertheless, when Ian Fleming learnt of the hatchet job, he wasn’t dismayed. On the contrary, he was delighted. He immediately proposed to his publishers that they use the article as the back-cover blurb for his next Bond book, with the wry addition of his four-letter response: “Ouch!” A handful of these proof copies were printed, but in the end, much to Fleming’s chagrin, the publishers got cold feet and decided to go with a more conventional cover.

Which is why this fascinating Cold War footnote has languished in obscurity for so long, until James Fleming unearthed it for his elegant, enlightening volume. Its focus is Soviet attitudes to all things Bond. These were necessarily limited because most Russians couldn’t speak English and wouldn’t have had access to the Bond books, let alone the films, even if they could. Yet Bond still managed to irritate the Kremlin.

After the Izvestia article there were assaults on Bond in Pravda and the East German paper Neues Deutschland. The KGB even commissioned a Bulgarian author, Andrei Gulyashki, to write a thriller in which a Soviet agent gets the better of Bond. Under the not-entirely-convincing title Avakoum Zakhov versus 07 (one zero was dropped for copyright reasons), the book was published in 1966 and translated into English in 1967.

When I call James Fleming at his home in Gloucestershire, he chuckles at my suggestion that his uncle deliberately baited the Russian bear. He mentions the scene in From Russia, with Love when Kronsteen, the Soviet spy and chess grandmaster, declares the need to assassinate 007. “It fits beautifully because that’s precisely what the Russians were thinking at the time: we must kill James Bond.” Life imitates art, it seems, even down to mass-market thrillers.

When I recently reread From Russia, with Love, I noticed how Fleming goads the Russians by implying that westerners are better at sex. In Russia, “the sexual climate is mid-Victorian”, he says. His hero soon beds the gorgeous Tatiana, who is “not a virgin”, but still “unawakened”. She feels a “passionate tenderness” for Bond after “the extraordinary fusing of their eyes and bodies”. In the film adaptation, she exclaims: “Oh James! James! Will you make love to me all the time when we are in England?” “Day and night,” comes the dry reply.

It has been pointed out that a true-life Bond would probably have been a lousy lover: drunk most of the time and in a hurry. But was this part of it? Did Fleming prick the sexual pride of Russian manhood? Perhaps, but there was clearly more. As noted, the Bond world vision was at times propaganda, plain and simple. The Russians are shown as callous, corrupt or both. James Fleming’s book also includes a translation of a scholarly anti-Bond essay that appeared in the Russian literary magazine Novy Mir in 1966, which points out that in the film of Dr No the islander Quarrel, the bombshell Honey and 007 are respectively dressed in the red, white and blue of the American and British flags.

There was another excellent reason for the Russians to strike at Bond, although it’s only touched on in Bond Behind the Iron Curtain. Fleming had a No 1 fan in the person of the president of the United States. JFK first read a Bond book in 1954 while recovering in hospital after an operation. In 1960 he invited Fleming to visit him at his home in Washington and asked for his opinion on how to defeat the Cuban communist potentate Fidel Castro. “Ridicule, chiefly,” was Fleming’s reply.

He then proposed a range of harebrained schemes. America should fly a massive cross over Havana at night to imply to the traditionally Catholic Cubans that God was annoyed with their atheist leader. Or they should drop on the Cuban people wedges of cash with labels reading, “Compliments of the Unites States”. Perhaps wisely, JFK didn’t follow the author’s advice.

On the other hand, his CIA head, Allen Dulles, who also knew and liked Fleming, did. Fleming suggested that Dulles develop some Bond-style gadgets. The American spooks duly tried, without success, to replicate the bugging device used in Goldfinger. Yet they did manage to create a version of the knife-tipped shoe wielded by the sinister Rosa Klebb in From Russia, with Love.

The Izvestia article mentions that Fleming described Dulles as his “best friend”. Might this, then, be the key to understanding the war on Bond? The books were being used almost as manuals at the very heart of the Kennedy administration. When, in March 1961, the president told Life magazine that From Russia, with Love was one of his ten favourite books, that settled it. To slate Bond was to slate the ideas and ideals of JFK.

A recent article by Theo Zenou in The Washington Post further argued that Kennedy “deliberately used Bond to project an image as a heroic leader who could meet any challenge in the most perilous years of the Cold War”. That’s no exaggeration. Dr No came out a mere fortnight before photographs emerged of Soviet-sponsored missile facilities in Cuba, just 90 miles from the coast of Florida. As in some Bondian denouement, the world held its breath as JFK and the Soviet leader, Nikita Khrushchev, faced off.

Khrushchev blinked. According to Zenou, it may partly have been by channelling Bond that JFK kept his cool. That’s pure speculation, of course, but if you choose to see the Cuban Missile Crisis as a clash between real-life equivalents of Avakoum Zakhov and James Bond, then it was clear who emerged victorious by the closing credits.

The fictional Bond has survived even longer than his creator can have dreamt. The 25th Bond film, No Time to Die, is already one of the most successful films yet at the UK box office. My seven-year-old son, Nicholas, who is half-Russian, says that his favourite film of any kind is Dr No. He’s now tackling the book too. Yet let’s leave the last word to James Fleming. Any war on Bond is doomed to fail, he says. “They keep thinking they’ve killed him. But he keeps popping up.”