The gentle art of pretension 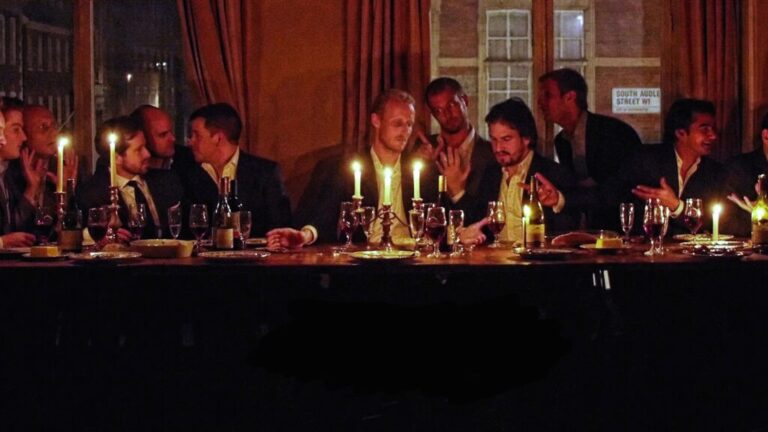 Picture the man at the dinner party. It might be a woman. That can happen. But it’s usually a man. Some smooth-faced Tristram or Tarquin, some bearded Xander or Xavier. His fork pauses, two asparagus tips trembling on its prongs, as, with one eyebrow hiked towards his glistening hairline, he drawls, “I think what we’re experiencing here is a Wittgensteinian difficulty with language…”

And here you are presented with a choice. You can either launch yourself physically at him over the table, arms windmilling, and try to take him down. Or – and this is the more conventional response – you can hunker down a little in your chair, and rest a cheek resignedly on your bunched fingers, and say nothing. Why? Because you have absolutely no idea what he’s talking about. It hurts, though. It might not be Wittgenstein who stymies you. It might be Malthus or Balthus. Or Hegel or Nagel or Schlegel. Or even, one of my personal favourites, Slavoj Žižek.

The point is that the whole and sole reason why Xavier, with his oiled smirk, slides that name into the conversation is in order to intimidate you into silence. I hate Xavier. He mustn’t be allowed to get away with it. Which is why I’d like to suggest a third option, which is to speed-read a book published this week called How to Sound Cultured: Master The 250 Names That Intellectuals Love to Drop into Conversation. Admittedly, I co-wrote it, but I really believe it can make the world a better place.

My co-author Hubert van den Bergh and I had only two rules while compiling our list of philosophers, scientists, poets, and artists to be included in the book. The first was that each name had to be one that was currently bandied about by intellectual show- offs. The second was that it had to be one that made us personally feel insecure, either because we knew literally nothing about the character in question, or else because we were aware of a queasy feeling that we ought to know a little bit more.

This – shedding those queasy feelings – was one part of the fun of writing it. Another part was discovering that the basic ideas behind many of these names were actually quite straightforward. Sigmund Freud, the cocaine-using godfather of psychology: his take-home insight is that everything is ultimately all about sex. You can see his point. The moustachioed Nobel Prize-winning missionary Albert Schweitzer? He essentially said we should all try to be nice to each other. Again, it’s not unreasonable. And how about the aforementioned Slovenian philosopher, Slavoj Žižek?

Let’s pause for a moment, and first learn how to pronounce his ominous cognomen. Names with tricky pronunciations are always good ones to drop. Nabokov is “na-BORK-uv”. And Slavoj Žižek, believe it or not, emerges as “SLA-voy ZHEE-zhek”, as in the Polari word “zhuzh”, to doll something up. What, then, is the Big Idea of this whiskery, unhealthy-looking continental? Apparently, it’s that we should have a default suspicion of big ideas. The fundamental aim of philosophy, Žižek avers, is merely “making you understand what deep s— you are in!” To unnerve Xavier, refer to this as “Žižekian nihilism”. Always adjectivise. It’s possible with nearly every name on our list. Marx-ist. Pynchon-esque. Are there any that resist it? Anaïs Nin has flummoxed us. Ninian? Ninnish?

Now a possible qualm. In helping readers combat Xavier, are we in fact teaching them to be more like him? It’s true that, to take him on, you’ll have to handle his dark conversational weapons: his intellectual nunchucks and knuckle-dusters. His throwing stars. You’ll resort to low blows. At one point, you may say: “Yes, but doesn’t [whoever it might be] contradict himself in his later work?”

At another: “I think those ideas have been superseded.” But you’ll have the advantage that, to you, it’s just a game. Xavier takes it all so seriously. He lavishes a slavish, slavering respect on these characters. That’s why we’ll win. For we, by contrast, know that many of them, in the end, are ridiculous. The Italian film director Michelangelo Antonioni, for instance, was so pretentious he ended one of his films (The Eclipse – prefer the original Italian name, L’Eclisse, “leck-LEES-say”) with seven minutes in which literally nothing happens.

The performance artist Joseph Beuys, meanwhile, kick-started his international career by painting his face gold and talking about pictures to a dead hare. As for the French poet Arthur Rimbaud: he once defecated on a table because he was bored. Another time, he put sulphuric acid in someone’s drink for a laugh. Does Rimbaud deserve our respect? Not for that sort of behaviour, he doesn’t (though the poetry’s not bad).

But don’t make the mistake of thinking we lack respect for all the cultural figures included in our book. In some cases, for sure, they earn it by being so brainy as to be completely baffling. Take Werner Heisenberg. The German physicist is famous for formulating something called the Uncertainty Principle, and if you think you understand it, you’re probably wrong.

But here’s the good news. Xavier doesn’t understand it either. If Xavier name-drops Heisenberg, just smile at him, and finger your nunchucks. Similarly, Wittgenstein. His big insight was that there are some things that can’t be helpfully spoken of in words. But it’s a bit more complicated than that. Nevertheless, the philosopher was a wonderfully inspiring figure.

Born into one of the richest families in Austria, he gave all his money away because it didn’t interest him. He was gay, a brave soldier, an architect. And he once clapped the internationally acclaimed philosopher Bertrand Russell on the back while the older man was reading his thesis, and exclaimed cheerfully, “Don’t worry! I know you’ll never understand it!”

A joy, for us, was learning more about figures like Wittgenstein, who commanded our admiration or affection. Alan Turing springs to mind. As do Lao Tzu, Doris Lessing, Virginia Woolf. But the prize probably goes to Socrates. Fat and ugly he may have been, but the barefoot philosopher could drink anyone under the table, and on campaign he bested the bravest with his sheer toughness. He was also modest.

Admittedly, he took this quality to an entertaining extreme, claiming that he literally knew nothing. Then, after a suitable pause, he added that this actually made him the most intelligent person in the world, since he was the only person who knew that he knew nothing.

As jokes go, it’s a yard better than the one with the sulphuric acid. Socrates – perhaps the patron saint of our book – devoted his life to combating the Athenian equivalent of Xaviers. Committed Xavier-haters could do worse than take him as a model. But a word of warning. Socrates was executed on trumped-up charges after he had succeeded in annoying one too many people.     So if there’s a large number of Xaviers in the room, proceed with caution. There’s a risk that several of them may launch themselves across the table at you in a pincer movement, and try to stab you to death with their asparagus forks.