The genius of Annie Hall 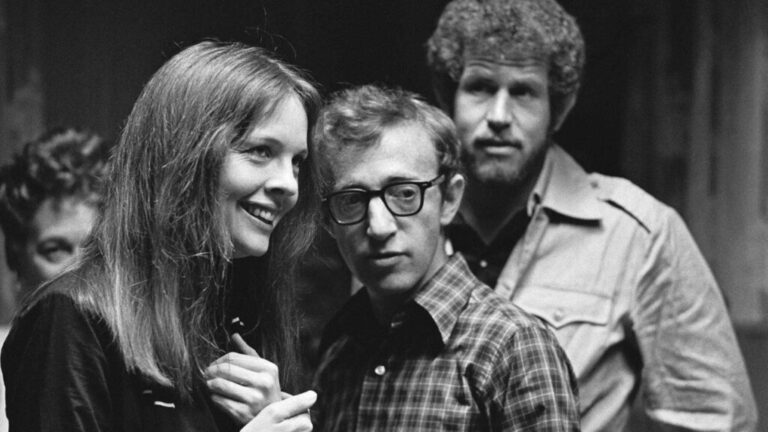 “There are two Jewish film critics at the cinema. One of them says, ‘Boy, Woody Allen’s recent films are really terrible!’ The other one replies, ‘I know! But… at least there are lots of them!’”

I have to apologise to Allen for that one, because it’s an adaptation of one of his own jokes – the one he uses to kick off his phenomenally excellent Annie Hall, a film so bursting with brilliance, it’s a shut-out reply to anyone who complains that the film-maker has made his fair share of stinkers.

None of that matters, because he also made Annie Hall.

There is, though, one other pleasure that Annie Hall offers too, a calling card of Allen’s, which is a little more controversial. He likes to stud his dialogue with high-cultural references. This gives a buzz of smug satisfaction for those in the audience who understand them. For those who don’t – or for anyone who just feels like a reminder – help is at hand in the form of a book I can’t recommend highly enough, on the grounds that I co-wrote it. It has just come out, it’s called How To Sound Cultured: Master The 250 Names That Intellectuals Love To Drop Into Conversation (Icon Books), and it includes notes on every one of the following allusions in Annie Hall. Meanwhile, here is a whistle-stop tour.

The reference: Allen’s character, the stand-up comedian Alvy Singer, goes to bed with a pretentious music journalist (Shelley Duvall). While smoking a cigarette later, the journalist remarks, “You know, sex with you is really a Kafka-esque experience.”

What it means: To understand this, it’s enough to know that two of the Czech author’s best-known works are entitled The Trial and The Metamorphosis. In the first, a man is put on trial for a crime he didn’t commit. In the second, a man wakes up to find he has turned into a bug. So the implication of the journalist is either that sex with Alvy feels like a punishment, or else that he reminds her of an insect. The odd thing is, I’ve always suspected that sex with Woody Allen really *would* be a rather Kafka-esque experience.

The reference: After a passionate love-making session with Annie (Diane Keaton), Alvy murmurs, “As Balzac said, ‘There goes another novel.’”

What it means: It’s a truth universally acknowledged that directly after sex, men feel a terrible urge to make silly jokes. For that purpose, they don’t come much better than this. The French novelist Honoré de Balzac is best-known for The Human Comedy, a sequence of 91 novels, short stories and essays that involve interlinking casts of characters.

In other words, he wrote a lot. It’s said he used to abstain from sex when he was writing, so he wouldn’t lose his edge. Since he was writing all the time, it’s hard to imagine when he relaxed. He probably didn’t ever literally say the phrase, “There goes another novel”, but it’s the kind of grandiose statement he favoured. After the idea for The Human Comedy first occurred to him, he raced round to his sister’s apartment in Paris and declared, “I am about to become a genius!”

The reference: One aspect of Alvy’s character is that he’s prey to a stereotypical Jewish fear of persecution. In one scene, for instance, he explains to a friend that a guy in a record store was dropping anti-Semitic hints: “There’s this big tall blond crew-cutted guy and he’s looking at me in a funny way and smiling and he’s saying, “Yes, we have a sale this week on Wagner.” Wagner, Max, Wagner!”

What it means: If you’re an anti-Semite today, you’re clearly an idiot. In the 19th century, you were a product of your times. But anti-Semitic the diminutive German composer Richard Wagner most certainly was. (He notoriously expressed his views in an 1850 essay entitled On Jewishness in Music.) His patriotic, bombastic operas later found a fan in the form of a certain Adolf Hitler, who wrote in his memoir Mein Kampf that his youthful passion for Wagner “knew no bounds”.

The reference: Alvy’s highly-strung wife Robin explains that she can’t have sex with him because she has a headache. He asks her if the headache is bad, and she replies, “Like Oswald in Ghosts.”

What it means: In Heinrich Ibsen’s 1882 play Ghosts, the character Oswald suffers from excruciating migraines, a symptom of the syphilis he has inherited from his rake-hell father. So Robin’s reference is what might be termed a little melodramatic.

The reference: Alvy is annoyed by a boringly self-important man in a movie queue, who keeps droning on about his opinions, while name-dropping the likes of Federico Fellini, Samuel Beckett, and Marshall McLuhan. In a moment of wish-fulfilment, Alvy produces McLuhan in person, who tells the boring man, “You know nothing of my work.” Turning to the camera, Alvy observes, “Boy, if life were only like this!”

What it means: McLuhan was a Canadian media theorist, a big name in the 1970s, though his star has waned a little since then. He is best remembered for his observation that “The medium is the message.” That was McLuhan’s way of saying that we shouldn’t worry so much about the content of individual movies or plays – far more interesting to consider the implications of film and drama as genres. What does it say about us as a society, for example, that we like to sit together in a darkened auditorium, watching actors perform invented stories for our entertainment?

The reference: Chatting up a girl, Alvy responds to hearing that her surname is Portchnik by saying, “You’re like New York, Jewish, left-wing, liberal, intellectual, Central Park West, Brandeis University, the socialist summer camps and the father with the Ben Shahn drawings, and the really, you know, strike-oriented kind of, red diaper… Stop me before I make a complete imbecile of myself.” To which the girl responds with the killer riposte: “No, that was wonderful. I love being reduced to a cultural stereotype.”

What it means: For anyone who felt the previous five names were a bit obvious, we’ll finish on this more obscure one. Ben Shahn was an artist who specialised in drawings. Obviously. But more specifically, his interest was in scenes of social realism, sketches of those suffering extreme poverty in the US during the Great Depression, for example, executed in a childlike faux-naive style. An American LS Lowry, perhaps. And as everyone knows, LS Lowry was … etc. One final thing. Has anyone else noticed that Annie Hall is, very nearly, an anagram of “Allen mania”?