Swimming from Albania to Corfu 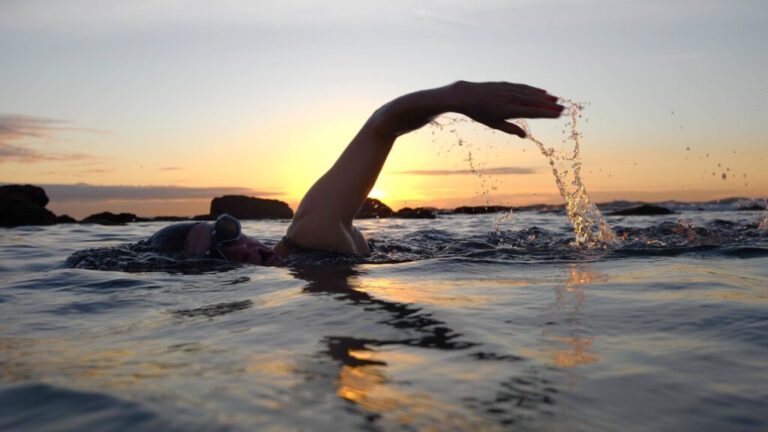 At its nearest point, Corfu nudges so close to Albania, you’d think you could skim a stone across and hit the other side. On windless summer nights, amid the clatter of the crickets on the Greek island, you can make out the bassline from the clubs of Saranda to the north, which throbs over the moonlit strait.

“Yes, but why do you want to swim across it?” I was asked by Elena, a Greek TV journalist.

Her cameraman Spiros kept his lens fixed upon me in sober anticipation. I didn’t really know what to say. What I’d have liked to do was quote the doomed mountaineer George Mallory, who, when asked why he wanted to climb Mount Everest, is said to have replied: “Because it’s there.” But I knew this would come across as silly. After all, a swim of around a mile and a half is hardly a Herculean feat.

Alternatively, I thought, I could say: “Because no one else has done it.” And in a sense, that would have been true. Certainly, there is no official record of anyone having swum from Albania to the Ionian island of Corfu. Not Byron, when he was kicking around here in the 19th century. (He’d swum the Hellespont, which is a similar distance, and perhaps felt that was sufficient.) Not the energetic Gerald Durrell, when he lived in Corfu with his family and other animals in the 1930s. Not even Patrick Leigh Fermor, the late great travel writer and adventurer, who, I had reliably been informed, once gazed across the water towards Albania and murmured: “I could swim that.” He never got around to it. And this, I thought, was reason enough for me. But I couldn’t very well start banging on about Patrick Leigh Fermor on Greek TV. And so I stuttered – I may even have spluttered – as I tried to concentrate on not addressing the one thing that was on all our minds, but which no one had yet mentioned. Then I thought sod it and said it.

“It’s two decades exactly since the fall of communism in Albania,” I lectured the camera. “In the period leading up to that momentous event, hundreds of Albanians swam across at night to escape the tyrannical rule of the dictator Enver Hoxha. It seems fitting, then, that the first official crossing should be made in this anniversary year.”

Every Corfiot knows this. Many of the bars and tavernas of the island’s north-east corner are staffed by Albanians who made the swim in the 1980s or 1990s, and the stories are legion. I’ve heard of one old woman who came across in a bath tub. More commonly, a gang of teenagers got together to make a group escape, clinging for support to a floating tractor tyre, and kicking their slow way from poverty to what they hoped would be a better life. Many, tragically, didn’t make it. They were shot, or swept away by the currents, or fell prey to exhaustion or the cold. But people don’t talk about this. In any case, I didn’t want to talk any more at all. I just wanted to get on with it.

So it was with some relief that I received the signal from Charis Katsaros, head of the local marine rescue team (EMED). As we chugged in two boats out of the picturesque little harbour of Agios Stephanos, I was simultaneously heartened and dismayed by the size of my support crew. There was the effervescent Robin Gourlay, a friend who had helped enormously in getting the thing off the ground; Elena and Spiros from Start TV; the unflappable Charis, and, resplendent in their bright red T-shirts, his team, which consisted of a doctor and three divers. Why three divers, I found myself wondering. I clearly wasn’t going to be allowed to drown.

At the same time, I couldn’t help reflecting that there would be more people to witness my humiliation if something were to go wrong – if, for instance, I was to develop cramp halfway across, and be forced to stop. Or if some other difficulty should arise.

The rugged coastline of Albania loomed closer and we entered its shadow. I clambered onto the sharp rocks and awaited my moment. Thumbs up and in I went. Completed the first stroke. Only a few thousand more of these to go, I thought.

The biggest danger, I had assumed, would be from ferries, but I wasn’t particularly worried. For one thing, I had spent every morning over the previous week ensconced on the beautiful beach at Kerasia near Agios Stephanos, ferry-spotting. I had set my alarm to vibrate every three minutes, at which point I would glance up from my reading, and see if the Corfu-Venice, Brindisi-Corfu, or any of the other boats were cruising through the strait. The worrying thing was that their timings seemed to bear no relation to the schedules published online by the ferry companies. Nevertheless, I’d noticed what I took to be a more or less clear window between 11 and 12 each day. I was also encouraged by the knowledge that the Greek minister of shipping, whose express permission had to be sought, had arranged that every ferry captain be informed in advance of what was taking place that day, and requested to slow his speed down to less than 10 knots.

This turned out to be rather fortunate, since, after 20 minutes of slow breaststroke, I glanced behind me to see an enormous Minoan Lines ferry ploughing past like a sea monster – and this was in the middle of what I’d convinced myself was the safest time of day. The boat was near enough that I could hear the captain on the intercom, telling his passengers that if they looked to their right, they would see a small begoggled figure splashing his way from one country to another.

I struggled on, beset by curious thoughts. For the first time, it occurred to me that the action of my stroke was rather as if I was repeatedly headbutting the sea. Occasionally my attention was caught by a single reed, suspended upright in the otherwise empty depths. Then, gradually, I became aware of a small problem. My baggy swimming trunks (I knew I should have plumped for Speedos) had begun rubbing at a particularly sensitive part of my body, causing a level of pain that would soon become unbearable.

I hesitated, but not for long. Asking Elena if she would switch off her television camera, I whipped off my trunks and tossed them up to the startled Charis. I then performed the next 40 minutes of my swim in the nude. It felt very odd: a naked Englishman swimming from Albania to Corfu, flanked by two boatloads of fully clothed Greeks. There should be a word, I reflected, for something that seems or feels symbolic, although it isn’t precisely clear what it symbolises. Perhaps just “bolic” would do. It was very bolic, I thought, this section of my swim: freighted with indecipherable meaning.

I’d anticipated that the crossing would take about 90 minutes, but it turned out to be less. Public embarrassment has a way of making one swim faster. As we returned into the harbour of Agios Stephanos, I asked Charis to give me back my trunks. Shortly afterwards he ignited an orange smoke flare to signal our success. And so, an hour and 10 minutes after diving in, I took the last few strokes towards land and climbed ashore at Damianos Bar into the arms (or almost) of my favourite barmaid. She had a pint of Mythos waiting for me. “You look very fresh,” she told me as I took the first sip.

I was congratulated. I had my hand shaken by strangers. Then Charis stepped on to the jetty and I went to thank him. He had made about 100 phone calls over the previous weeks in order to secure permission not only from the minister of shipping in Athens, but also from the passport control in Corfu, the coast guard, the harbour master, the local police, and from the minister for civilian protection, whoever he might be. Charis and I engaged in a manly hand-grip, somewhere between a handshake and a high five.

Over his shoulder, I saw Elena giving me a funny look. I wasn’t surprised. She couldn’t have guessed, when she’d got up that morning, that she would spend the core part of her day being mooned by a naked foreigner. Her look seemed to reiterate her original question. “Why,” it seemed to say. “Why would you want to do that?”

Was it time for my Mallory line? It might be misinterpreted, I realised. Or should I try, perhaps, to explain to her the concept of something being bolic? I decided to let it go. She left, and we all went for lunch.