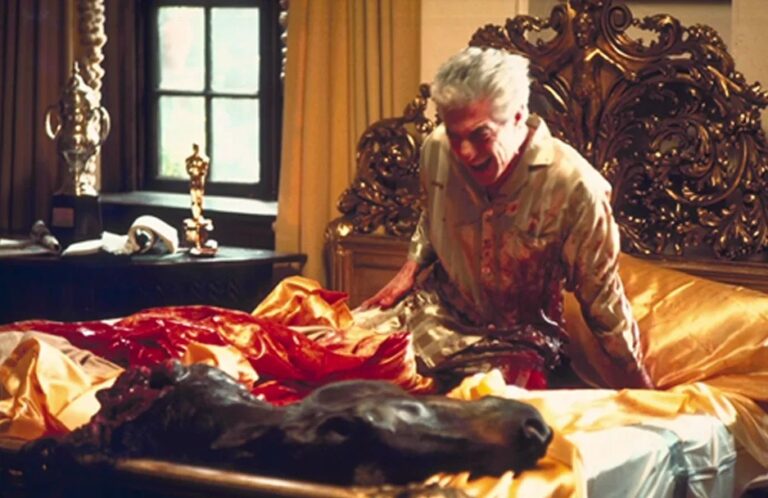 The actor never knew they would use a real horse’s head. This was May 1971 and John Marley was preparing to perform in the most iconic scene in The Godfather, playing the corrupt movie producer who wakes up to find a horse’s head in his bed. Reportedly, Marley assumed this would just be a plastic prop. But the director, Francis Ford Coppola, had other ideas.

In a note to himself, Coppola observed, “If the audience does not jump out of their seats on this one, you have failed.” So he quietly sent an assistant to a dogfood factory to pick up a genuine head, newly hewn from the shoulders of a racehorse. She brought the stinking object back in a freezer box and it was slipped into the bed with Marley for maximum authenticity.

At one point, the story goes, the actor’s bare toe nudged against the bloody head, and he lost control: by that account, his screams of horror are real. It was worth it, though. The resulting sequence is perhaps the best in the film. The film, which was released 50 years ago this week, is arguably the greatest ever made. So what is it about the scene that makes it unforgettable?

When I ask Mark Seal — author of Leave The Gun, Take the Cannoli, the definitive book about the making of The Godfather — he says the answer lies in the contrast with what has gone before. The movie begins at the wedding of the daughter of the Italian-American Mafia don, Vito Corleone. It’s a scene of laughter and dancing. This rich, powerful family knows how to throw a party. Then Vito’s godson, the crooner Johnny Fontaine, comes to him for help. There’s a film role he desperately wants, which would save his career. But the producer, Jack Woltz, won’t play ball. Relax, the don reassures him, before delivering one of the most famous lines in cinema: “I’m gonna make him an offer he can’t refuse.”

The seven-minute sequence that follows involves no Italians, and none of the major characters, such as the Godfather himself, or his sons, Sonny, Fredo or Michael. Nevetheless, Seal tells me, its climax is “surely one of the most unique scenes of blood and gore ever produced”. It “sets the tone for everything to come”.

This is true. Yet there was more going on, too. The making of The Godfather was one of the most hellish experiences of Coppola’s life. The suits at Paramount had no faith in him and he had to fight even for his casting choices. For example, they were violently opposed to the idea of Marlon Brando in the title role. Sure, Brando had once been a force to be reckoned with, but he was difficult, and they thought his day was done. In one meeting, the head of Paramount told Coppola bluntly, “As long as I’m president of the studio, Marlon Brando will not be in the picture.”

Coppola, who had suffered from epilepsy in his teens, responded by throwing himself onto the floor and faking a fit. The startled president agreed to let Brando try out for the role.

This, then, was the climate in which Coppola was working: a gauntlet that would ultimately settle the debate as to whether he was a genius or a loser. On top of which, his wife Eleanor was pregnant with their third child, Sofia. On 14 May 1971, as Seal describes it in his book, she went into labour and Coppola rushed to the hospital, taking his video camera and filming the birth. Six days later, he shot the horse’s head scene.

You don’t have to be a psychologist to see the result as a nightmare of childbirth, prompted by Coppola’s anxieties about both the literal birth of his daughter and his concerns over what kind of film he was creating: monster or masterpiece?

The Godfather is, par excellence, a film about parenthood. It opens with a wedding, the natural sequel of which is childbirth. Yet here we cut to the big-shot producer’s palatial LA villa.

In Mario Puzo’s novel, on which the film is based, the producer is married with children. In Coppola’s version, he lives alone, surrounded by silent staff. His only real love is for his beautiful racehorse, Khartoum. “I’m not gonna race him, though,” he fondly tells Corleone’s emissary, Tom Hagen. “I’m gonna put him out to stud.”

The offspring Woltz is anticipating will be pure-breed foals. For all his swagger, he is coded feminine. He’s short. Marley was 5ft 6in. To play Woltz, his hair is styled big and bouffant. During the dinner scene, when he tells Hagen (Robert Duvall) that he will never give Fontaine that part, he sports a double-breasted blazer with white trim. While Hagen’s grey suit picks up the granite of the fireplace, Woltz’s clothes echo the black and white uniform of the maid standing in the background. Message: he is soon to be relegated to the status of servant.

It’s dawn. Like an intruder, the camera glides through the courtyard before entering Woltz’s bedroom. It’s a chamber seemingly made of gold. The elaborate bedstead is gilt. The sheets and pillowcases are golden silk. On the bedside table stands an Oscar. As we move in on the sleeping producer, this golden statuette is carefully kept just in view, in the corner of the screen.

Woltz stirs and wakes. Blearily, he finds blood on his hands. He pushes back the covers, to reveal more and more blood — and then, the severed head of his beloved horse, its blind eyes staring.

That head in the bed is arguably a callback to the most famous painting of a nightmare ever committed to canvass — The Nightmare by the Swiss artist Henry Fuseli, which, as chance would have it, is also about to celebrate a birthday. It was first unveiled at the Royal Academy 240 years ago next month. The painting shows a sleeping beauty, her back arched, one arm hanging to the floor. On her chest squats an ugly demon, an incubus believed to bring nightmares. Bizarrely, a horse thrusts its head through the drapery behind, eyes bulging, white as marble.

In Fuseli’s vision, as in Coppola’s, the bed is presented in front of hanging curtains. In both, there is a round side table on which sits a glass phial containing medicine. Did Puzo have The Nightmare in mind when he wrote that scene? Did Coppola, when he filmed it? The image was an instant hit, reproduced in countless prints and spoofed in cartoons. It influenced artists and writers from Dali to Peter Shaffer. Rewatch the scene in Coppola’s Dracula film in which a bestial Gary Oldman ravishes a sleeping Sadie Frost and you have to admit the director is a Fuseli fan.

There’s a false etymology at work here. Despite a widespread belief that the word nightmare has something to do with horses, it derives from the Scandinavian word mare or mara, which refers to the demon that sits on your chest and brings you bad dreams. Fuseli was aware of it, but still included the equine link in his painting. Coppola, who said he wanted his film to be “more painterly than pulpy”, actualises the misassociation to create the nightmare of all nightmares.

According to Peter Biskind, the author of The Godfather Companion, The Godfather represented “a jolt of electricity for the industry”, becoming the climax of the first wave of the New Hollywood movement in film-making. Young punks like Coppola were ripping up the rulebook, shooting on location instead of on studio lots, pushing for more realism and more violence, with a gonzo approach that might involve, say, slipping a real horse’s head into a bed to get the right reaction from an actor. In this, they were fighting against the staid old suits of the studio system: like Woltz, in other words.

In the horse’s head scene, Coppola played out the struggle he faced to get his film made and the guerilla tactics that he deployed to succeed.

This, then, is the final reason why the scene sticks. For Coppola, it wasn’t strictly business. It was personal. It was his two-fingered salute to the studio bigots and big-shots who got in his way. It was his blood-stained calling card. In short, it was his offer they couldn’t refuse.