The real monster in Deliverance 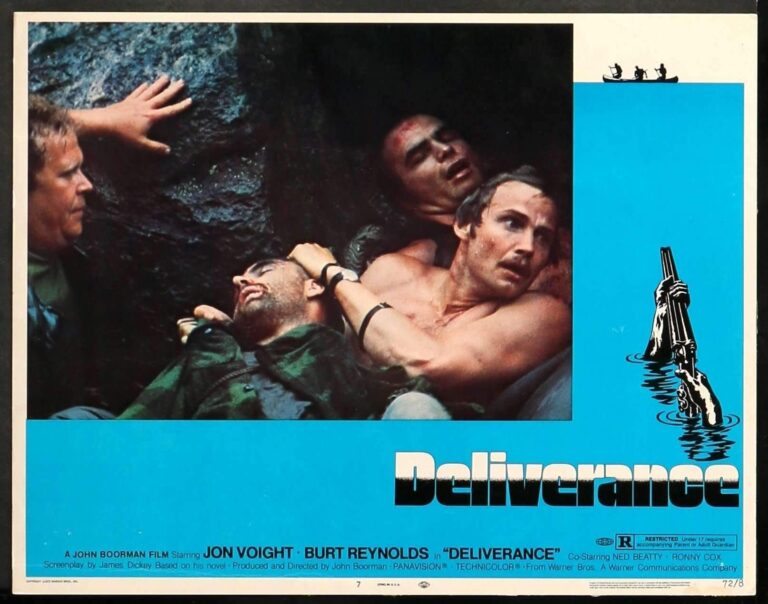 In the 1970s, the hard-living American poet and novelist James L. Dickey used to wander around, muttering, “Oh, I’m so big. I’m so damned big.”

Dickey by name and Dickey by nature – but he was at least telling the truth, since as well as being 6ft 3in, he had by then published the novel Deliverance, his bestselling epic about four city-dwellers who go canoeing on a river and run into every kind of trouble. Then on 30 July 1972, 50 years ago, the film came out.

It had been a turbulent production. Dickey, an alcoholic, got in a rage with the English director John Boorman for cutting the first 19 pages of his script. The story goes that he used to sit in a bar near where the shoot was taking place and tell anyone who would listen, “God, they’re ruining my f***ing movie, ain’t they. They’re not doing my book.” Things came to a head when he assaulted Boorman, who was seven inches shorter than he was, breaking his nose and knocking out four of his teeth. Boorman finished the film nevertheless, and it became a hit: the fifth highest-grossing movie of the year.

Yet the cultural purchase and resonance of Deliverance has far outstripped its box office receipts. The question is: why? Is it because of the notorious scene in which one of the friends (Ned Beatty) is raped by rednecks while being ordered to “squeal like a pig”? This may have something to do with it. It’s also, at least in part, because Deliverance features Burt Reynolds at the height of his muscular appeal. Those who admired him could lust over his thick chest hair and black rubber vest. Those who didn’t could enjoy the sight of his broken femur sticking out through the skin after he gets smashed against a rock.

Yet there’s something more going on here, too. Rivers have been at the heart of civilisation, and our human story, since forever. The garden of Eden, the Bible says, was fed by a river.

And out of the ground made the Lord God to grow every tree that is pleasant to the sight, and good for food; the tree of life also in the midst of the garden, and the tree of knowledge of good and evil. And a river went out of Eden to water the garden.

That river split into Pison, Gihon, Hiddekel, and the Euphrates. The point is, though, that it all began with a river.

The first major technological innovation in travel – which empowered us to “light out for new territory”, as Mark Twain puts it in Adventures of Huckleberry Finn – was a boat to carry us, and our cargo, on the surface of the river. 5,000 years before we learned to apply a harness to horses, we crafted fallen tree trunks into dug-out canoes. The oldest known, the Pesse canoe, found in Holland, is 10,000 years old.

An alien striving to define a human city might describe it as “a large number of stone dwellings straddling a river”. Look at London, or Paris, or Rome, or Nur-Sultan. That’s what you see.

I was reminded of this recently when I canoed with a friend down the Danube. We started in the middle of Vienna, the most civilised of cities, and paddled out past the monolithic IBM Building: once the Diana Baths, which hosted the first ever performance of Strauss’s Blue Danube. As Claudio Magris remarks in his book Danube, the name of that waltz is actually inaccurate, since the Danube isn’t blue. In reality, it’s blond.

Yet passing through ten countries, the Danube is the most international river in the world, and so arguably the most civilised. Whatever its colour, it’s worth celebrating and protecting.

We rowed past the Austrian city of Hainburg, where Haydn learned the rudiments of music, going on to compose symphonies that a Viennese critic would compare to “pure clear water”. En route to Bratislava and thence Hungary, we learned that, near Hainburg, the Soviet era authorities once licensed the building of a vast hydroelectric plant. The locals were outraged. In Vienna in 1984, the Animals Press Conference (Pressekonferenz der Tiere) took place, at which leading activists dressed in costume as animals: a certain councillor as a stork, a playwright as a toad, and most notably, the intellectual and journalist Gunther Nenning as a stag.

That movement culminated in the occupation by protestors of the Hainburger Au, the area around the power plant. There were clashes with police that left 19 injured. Ultimately, the building work was suspended, and never completed. The Occupation of the Hainburger Au was the first time civil disobedience had successfully been practised in Austria.

What does any of this have to do with Deliverance? Big James Dickey was inspired to write his novel by the work being done to build a hydroelectric plant on the Coosawattee River in the southern state of Georgia. The project involved turfing locals from their homes so the area could be flooded, and devastating the river ecosystem that had developed over millennia.

“They’re drowning the river, man,” Lewis (Reynolds) explains at the start of the movie. “Just about the last wild, untamed, unpolluted, un-fucked-up river in the South… They’re gonna rape this whole landscape.” He proposes their canoeing trip to celebrate the river before it dies. But to the locals, and in a sense to the river itself, he and his friends are the bad guys.

If you had to choose between a rift with a river and an altercation with an ocean, you’d probably pick the river. The sea is so massive, it’s like a joke. But a river can be terrifying too.

Not the Danube that we navigated, where apart from the odd eddy, and rare hydrofoil, the perils were few. To be sure, Taoists envisage the benign force governing the universe as like a river. The waters of the Nile fertilised the fields of the civilisation around it. In England, we’re more familiar with the soothing stories of Kenneth Graham and drollery of Jerome K. Jerome than anything more elemental. But closer consideration reveals something profoundly double-edged in our relationship with rivers.

As Heraclitus noted, they are constantly changing: you can’t step in the same river twice. Yet as Siddartha realises in Herman Hesse’s novel of that name, they are also always there.

My Hungarian friend Zsolt Gardonyi, who rented us our canoe, had the same realisation fifteen years ago. He was seated by the Danube in a contemplative mood when he was struck by the mass and immortality of the river. “There’s something marvellous about so much water,” he said. Soon afterwards, he founded Evvezvelem, his company offering river trips to punters, safe in the knowledge that, despite its constant motion, the Danube isn’t going anywhere.

Rivers are linear, proceeding relentlessly from the mountains to the sea. But at the same time they are cyclical, since the water returns to the hills as rain, and the process starts again.

In perhaps the most famous of all river narratives, Joseph Conrad’s Heart of Darkness, the narrator Marlow reveals that he has always been fascinated by the appearance of rivers on maps. To him, they suggest snakes: a hint of the serpent in the garden. In that story, he moves not with the African river but against it, heading upstream in search of the missing Kurtz, who has gone native. “Going up that river was like traveling back to the earliest beginnings of the world,” Marlow notes, “when vegetation rioted on the earth and the big trees were kings.”

Rivers lead both towards but also away from civilisation. In cities, you could say, they are the only wild thing left. In The Iliad, after his best friend Patroclus has been killed in the Trojan War, Achilles goes on the rampage. Fighting first on the banks of the river Scamander, and later in the water itself, he slaughters so many Trojans that the river god, Scamander himself, rises up in outrage at this pollution of blood.

He spews the corpses out onto the land, “bellowing like a bull the while”, and falls upon Achilles…

beating on his shield, so he could not keep his feet; he caught hold of a great elm-tree, but it came up by the roots, and tore away the bank, damming the stream with its thick branches… Achilles struggled out of the stream and fled over the plain, for he was afraid.

Achilles afraid is not something you see all that often, and it’s in reaction to the wrath of the river – the same wrath that, I would argue, is the real theme of the film Deliverance.

The river that the four men (Reynolds, Beatty, Jon Voight and Ronny Cox) entrust themselves to turns out to be nothing like the tamed Thames or serene Seine. It’s a monster, which knows its days are numbered and strikes pre-emptively at these delegates from the world of concrete and power-lines. By that interpretation, the hillbillies, horrific as they are presented to be, are the river’s representatives. Like the animalist activists at the Pressekonferenz der Tiere, they associate with the wild. The injunction to Beatty to “squeal like a pig” while he’s raped is the same way they will squeal, when their landscape is “raped”, as we have been told it will be.

Man versus nature is one of the great themes, from ancient epic to Robinson Crusoe, and on to Jaws and The Perfect Storm. Man versus river is an intriguing sub-category. We’re not, most of us, ambivalent about great white sharks or storms at sea. These are best avoided. But when it comes to rivers, we tend to think we’re in safe hands. Rivers water the crops and bring goods from far-flung lands. We gather beside them in crammed cafes on the Southbank or in the bright sunshine by the side of the Tiber and feel a meditative calm at the sight of their stately progress.

Yet as that episode in The Iliad reminds us, we used to worship them as gods, and feel afraid of them, too. In Deliverance, the river, which the men have forgotten to fear, reveals its darkest side. They are smashed like matchsticks as they hurtle down the rapids. One of them is killed. Another is horrifically injured. Three out of four men survive, but it isn’t any kind of victory.

In the last scene, after they return to civilisation, and are recovering, one of them (Voight) has a nightmare. He’s back at the river. The hand of a corpse breaks the surface.

Deliverance, which begins as a buddy movie, becomes an adventure epic, then a psychological thriller, and in the end, a horror film. This is why it still disturbs us. As in many horror films, the thing we trust, the thing that seems safe – the mother, the child, the clown – urns out to be malign. Dickey’s reliable river is revealed to be the River of the Dead. It is the River Styx.