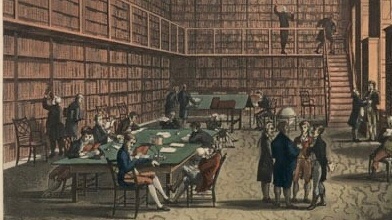 Clearly, I’m not an intellectual myself, or I wouldn’t have begun this article with reference to a Google Images search. I remember my horror once at being informed by a female colleague that, in an unguarded moment (was I drunk?), I had referred to myself as such. On hearing this, the rest of the office gathered round and roared with laughter in my face. They then took it in turns to spit on me. OK, this is an exaggeration, but that was how it felt. Obviously, their mockery was aimed at my pretentiousness, but a sliver of it, I reckon, was rooted in our attitude towards the very idea of intellectuality.

In Britain, we titter at it. We snigger and snicker. Occasionally, we hoot. Why should this be so? It’s hard to say, but perhaps our lack of cafe culture has played a part. Here, it’s too damn cold to sit around on terraces, drinking red wine and discussing the unbearable lightness of being. Wine may be relevant, too. Wine loosens the tongue. Sometimes it lets it off the leash altogether. We are a beer- drinking nation, and beer, as everyone knows, is best drunk in silence, interspersed with grunts and giggles. Am I guilty of stereotyping here? Are these generalisations?

This year, November 12 marks the 100th anniversary of the birth of a man who made a career out of exploring similar questions. The French intellectual par excellence, Roland Barthes (the surname rhymes with “art”), wrote in his 1957 volume Mythologies of how the French constructed an artificial association with red wine, absorbing it into their idea of national identity. He termed this a “mythe”. But once such a “myth” is widely believed, doesn’t that render it half-true? There isn’t the space here, I’m pleased to say, to interrogate the intricacies of early Barthesian thought. However, it’s interesting to consider how his centenary is being marked in his native land. There’s a cornucopia of concordances, colloquia and other such academic extravagances. Barthes films, Barthes talks, Barthes walks in the park. The Paris fashion house Hermès has even designed a silk scarf in his honour: a Barthes scarf (should we call it a Barfes?), with a motif inspired by his 1977 book A Lover’s Discourse: Fragments.

In Britain, we hold our sides. We stamp our feet. We go and lie down in the corner and place a damp towel over our forehead. The very idea of a programme of events devoted to a man known as one of the founding fathers of poststructuralism sends us into paroxysms. Over here, the intellectual provokes not automatic veneration, as in France, but suspicion at best and, at worst, contempt. WH Auden summed the thing up when he wrote: “To the man-in-the-street, who, I’m sorry to say, / Is a keen observer of life, / The word ‘intellectual’ suggests right away / A man who’s untrue to his wife.”

Consider also a book about to appear called How to Sound Cultured: Master the 250 Names That Intellectuals Love to Drop into Conversation. Admittedly, I co- wrote it, but that doesn’t mean it isn’t relevant to my argument. On the contrary: the reason my co-author and I chose that title is precisely because it plays to what we see as the British attitude of amused suspicion towards intellectuals.

Try an experiment. Imagine an intellectual. Now imagine a group of them. A whole group! Bleeurgh. Or perhaps the collective noun should be a “grope” of intellectuals, since, as Auden observed, a popular notion about the species is that they are morally dubious when it comes to sexual matters.

Our research certainly bore that out. Barthes, we learnt, spent his down-time cavorting with boys in the Maghreb. Albert Camus may have looked cool while smoking a cigarette, but marital fidelity wasn’t his strong suit. As for the feminist icon Simone de Beauvoir, she used to seduce her female students and then pass them to her lover Jean-Paul Sartre, who had a penchant for relieving girls of their virginity. They referred to these arrangements as their “trios”.

In his recent book How the French Think, the Oxford fellow Sudhir Hazareesingh bemoans a putative recent decline in French intellectual life. I’m not sure about that. In England, I’ve learnt from experience that if you tell someone you’re publishing a novel, they’ll ask you what advance you received. In France, that’s inconceivable. I met a Frenchman recently at a drinks party who confirmed this. His name, he said, was Oog. (I guess he spelt it Hugues.) Oog told me that in today’s France, the tender novelist would be asked: what’s your book about? Or he or she might be enveloped in a Gallic embrace. Even if the Rive Gauche isn’t throbbing with intellectuals in quite the same way it was in the 1960s, say, the cultural scene isn’t totally moribund, Oog insisted.

Our book backs him up. The youngest name on our list is that of a Frenchman, the 44-year-old economist Thomas Piketty, whose Capital in the Twenty-First Century was a surprise bestseller last year.

Within the sleek and sizzling pages of How to Sound Cultured, you’ll also find other possible explanations for British suspiciousness towards the intellectual kind. As well as beer and bad weather (which rather go together), they include the Reformation (legacy: a preference for simplicity of thought); the Civil War (legacy: a distrust of any grievance so extreme it might provoke another civil war); and the horrors of the French Revolution. “Blame Rousseau,” Burke famously argued with regard to the last of these. “Blame intellectuals” was the message that many took home. For anyone still feeling unsure, the disgrace of Oscar Wilde a century later seemed to prove that the inevitable consequences of being too clever were sodomy and a lengthy jail term.

Consider two further factors. The muscular Christianity propounded by Thomas Arnold engendered a public-school ethos inclined to rate sporting prowess above academic achievement. (This is no personal grouse. I still have the little silver cup I won as runner-up in the junior fencing tournament.) Then the rise of US power in the 20th century allowed us to think we needn’t learn any language other than our own. What a relief! What had been an inclination — not to read serious books in the language in which they were written — became an inability.

Whatever the reasons, and however you may feel about it, the end result is that in Britain, as well as extreme scepticism at the very notion, there is genuinely no such thing as the celebrity intellectual of the cigarette-smoke-swathed Barthesian or Sartrean sort. They simply don’t exist.

In How to Sound Cultured, there are one or two names from the past that nearly qualify. The libidinous Bertrand Russell, for instance, or the kinky JG Ballard. But neither, splendid as they were, made the same outlandish claims on coolness and systemic originality as the existentialists or deconstructionists, for instance.

How about names from the present? Can Richard Dawkins cut it? And what about John Gray? Or James Wood, for that matter? Roy Foster? Roger Scruton? Paul Theroux? Has Theroux got what it takes? And how do you feel about AC Grayling? Alain de Botton? Will Self? Giles Coren?

None of these, naturally enough, made it into How to Sound Cultured, where they would have had to square up against the likes of Voltaire and Wittgenstein. But nor — separate point — do any of them qualify as the kind of rare intellectual ostrich we’ve been discussing. Some are youngish. Others lack the cross-continental clout. And in a couple of cases, I wasn’t being serious.

Let’s not be glum about it. If you look at the names that do make it into our list, a pattern emerges. Our British inclusions tend to be poets, playwrights: performers, in other words, rather than pontificators.

Which brings us back, with a sigh, to Stephen Fry. And incidentally, I’d advise anyone who doubts the man’s intellectual credentials to go back to some of his A Bit of Fry and Laurie television sketches, or dig out a dog-eared copy of Paperweight (his selected journalism), for a demonstration of the perfect marriage of wit and erudition. But fine, if you like: Fry is not really an intellectual. Not in the continental sense.     But I have to say that, after writing accounts of the likes of Arthur Rimbaud (lunatic), Arthur Schopenhauer (misogynist) and Leopold von Sacher-Masoch (cat- murderer), I’ve realised that not being an intellectual is, in the end, by far the better choice. I’d rather have a cucumber sandwich with Stephen Fry than be the filling in a Jean-Paul Sartre and Simone de Beauvoir baguette.