The Boy in the Dress 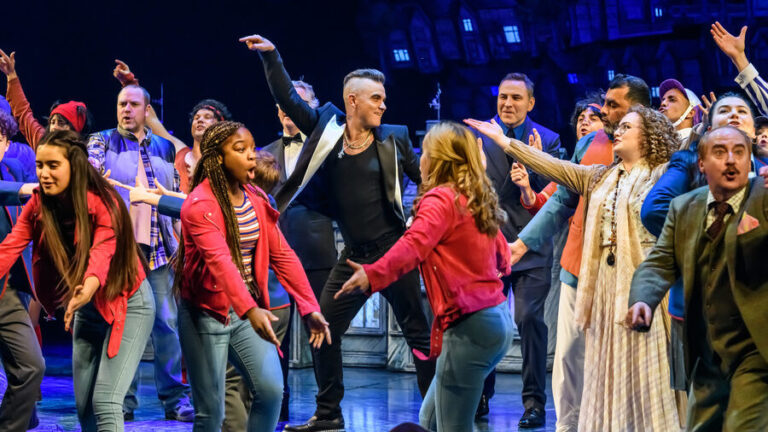 The RSC’s musical adaptation of The Boy in the Dress, David Walliams’s 2008 children’s book, arrives on such an awesome wave of talent, it’s pointless to resist. Gregory Doran directs with aplomb. Mark Ravenhill wrote the witty script. The rousing songs are by Robbie Williams and Guy Chambers. The younger roles are played on rotation; the night I went, Toby Mocrei completely carried it as our hero,

Dennis, a 12-year-old who, growing up in a nameless provincial town, feels different.

Dennis may be the star striker of the football team, but he longs to wear a frock. Then he befriends the school hottie, who urges him to do just that. And what do you know? He looks terrific. But can he pull it off in the wider world?

Like Billy Elliot or The History Boys, The Boy in the Dress creates a world that’s as unchallenging as possible, comfortingly crammed with stock characters and predictable twists, to sell a progressive message. In this case, it’s that cross- dressing is not weird or worrying, but fine and fun — and when authority figures seem disproportionately furious, you should probably wonder why. Among the supporting cast, Forbes Masson is superb as the pop-eyed headmaster who is concealing secrets of his own.

Not all the songs hit home, although the opening number, Ordinary (“What’s so wrong with being ordinary?”), and the stomping Disco Symphony, which Dennis sings after first slipping into his sequins, are both very good indeed.

In the end, you may as well surrender. This lovable mutt of a musical keeps racing back to drop the stick at your feet and gaze up at you, tail going like the clappers. It’s going to be huge.