A sunny spot by the Black Sea 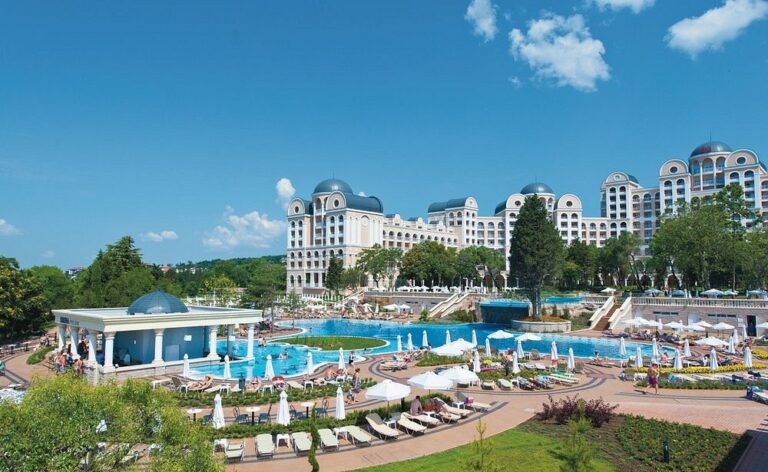 “The biggest mistake people make about Sunny Beach is to think that it’s only for teenagers.” That’s what Bulgarian travel agent Tanko Kovalev tells me.

Later, stretched out on a poolside recliner, idly speculating about the ages of my fellow guests, I think he might be right.

I can see a good spread of pensioners. The chap snoozing under a tree, sporting a white walrus moustache, looks like a time traveller from the 19th century.

For a decade or so, the middle part of Sunny Beach — a pristine sweep of sand on Bulgaria’s Black Sea coast — has heaved with sunburnt teenagers getting drunk on £2 pints of beer. But stay at the bottom, or at the top, and you can avoid the wet T-shirt competitions and punch-ups.

The number-one appeal is how cheap it is. Sunny Beach is said to be one of the cheapest beach destinations in all of Europe.

Bearing this in mind, I’m impressed by the appearance of the Riu Helios Paradise, where I’m berthed.

A 597-room, four-star behemoth in terracotta, it slightly resembles the Harrods Furniture Depository on the Thames. I’m paying £40 a night, all inclusive (alcohol, too).

It has five restaurants. There are also four swimming pools. And if you’re feeling more adventurous, the Black Sea is on the doorstep.

Its water is oddly unsalty, so you feel more like you’re swimming in a lake. Nor is it black, by the way. The name is owing to its violent winter storms, which are bad news for sailors.

My fellow guests include German and French people, but they are mainly Britons. John from Stoke Newington tells me he bought a house near here in 2005 for £12,000. Since then, he has done nothing with it. He just comes out every few years to look at it. I get talking to two women from Bristol, who are on their honeymoon. They are having a nice time but are finding it quiet in early May.

One of them, Shelley, had her handbag stolen off the back of her wheelchair. This was “disappointing”, she says.

In the evening, they recommend Funny Pub, which is “where the action is”. A half-hour walk along the beach, it’s Brit-central. Nearby, I spot a lurid-looking restaurant. ‘We never close’, the sign outside declares.

At the bar, enjoying my £2 pint of local Kamenitza beer, I strike up a conversation with a man named Russell from Swansea. As a poetry fan, I ask him if he likes Dylan Thomas.

“More for the drinking than the writing,” comes the reply. Russell, too, has bought a small house, an hour’s walk inland in the village of Tankovo. Every evening, he strides down to the beach to drink the cheap beer.

Funny Pub is loud. The live band blasts out renditions of Can’t Help Falling In Love, Losing My Religion and Wish You Were Here. I ask the barman to recommend some clubs and he shouts back: “Bounce!” and “Viking!” Looking online, I find photos of writhing, blissed-out adolescents: images of heaven or hell, depending on your definition.

If you’re in the mood for culture, Sunny Beach offers that, too.

Twenty minutes away, on a little peninsula sticking out into the Black Sea, sits the ancient town of Nessebar. It’s easy to explore and is home to incredible Byzantine churches. The icons and murals are beautiful to behold.

Tucking into my kebab at Nessebar’s Hemingway restaurant (goodness, that guy got around), I reflect that I made the right choice in coming to Sunny Beach.

Nessebar has been a discovery. But the highlight is spending one whole day beside the many pools of the Helios Paradise — reading, daydreaming and, at one point, helping myself to a banana ice cream.