City in the sky 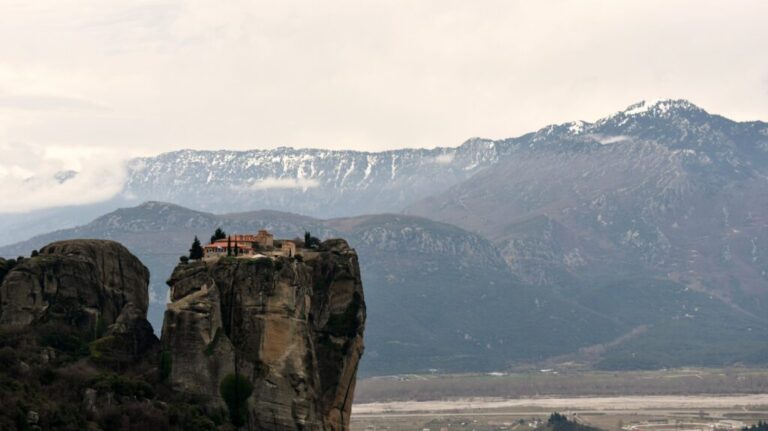 The poet and painter Edward Lear once remarked that ‘no pen or pencil’ could do justice to the mountain monasteries at Meteora, and I’m happy to prove him right.

Actually, I was meant to be sailing with my eccentric Aunt Marigold and her husband Winslow. But adverse weather had kept us in Thessaloniki – and so, to avoid cabin fever, we set off for Meteora.

The three-hour drive into the heart of central Greece ended in our first glimpse of these rock pillars, which rear up inexplicably from the plain.

What formed them? The geological jury is out. Point is, they’re there, and they were there a millennium ago, when hermits first began climbing the rock-faces in search of solitude.

This was phase one. Phase two was when groups of monks, fleeing Ottoman persecution, wandered west from Mount Athos in search of somewhere safer.

The pioneer was St Athanasius, who was also known as Athanasius the Meteorite, though not because of any special powers of levitation.

That said, some believed that, in order to have found Great Meteoron, the largest monastery, he must have been carried up there by some enormous bird.

More likely, he commissioned one of those agile hermits to scale the peak known as the Broad Rock, and set up a winch and windlass, which were then used to lift the necessary building materials.

For centuries, the only way up for non-climbers was via a network of rickety ladders tied to the rock-face.

Failing that, you fired a gun. At this signal, if you were lucky, the monks might let down a net. You then clambered into it, and got hoisted hundreds of feet into the air, while the bearded brothers sweated at the windlass.

Sadly, when I visited, this option was no longer available. Instead, Marigold, Winslow and I ascended via the staircases that were carved into the rock in the early 20th century. Then we paid the few euros to enter.

Marigold, being a woman, was required to don a skirt to cover her legs. We didn’t want those monks getting frisky.

All the monasteries are worth visiting, but perhaps the grandest, after Great Meteoron, is Varlaam. As you step into the narthex, or entrance-chamber, of its main church, you’re assailed by a fantastically gruesome fresco of The Second Coming.

From under the throne of a placid-looking Christ there flows a great river of blood, dotted with the bodies of sinners, who are either being forked by grinning demons or else gorged upon by a variety of voracious monsters.

The traveller Robert Curzon, who visited in 1834, noted that the monks had ‘a singular love’ for ‘everything horrible and hideous’. But it’s not all gore at Meteora.

There’s beauty, too, in abundance, y, , in the crucifixion fresco in Varlaam’s nave, which is gazed down upon by the oddly smiling faces of the sun and moon.

Many monasteries also bear witness to amazing craftsmanship, from the ornate doors of the church at Varlaam, to the rich epitaphios (a cloth representing the body of Christ) at Great Meteoron.

And of course, whenever you step outside, there are spectacular views of the other monasteries and the plain beyond. To live like an eagle in the clear bright air, with nothing to distract from your books and meditations – it must have been an extraordinary life, and be so now for the occupants of the six monasteries that still operate. As a tourist, you get only a glimpse. But it’s one you won’t forget.