In search of Moroni 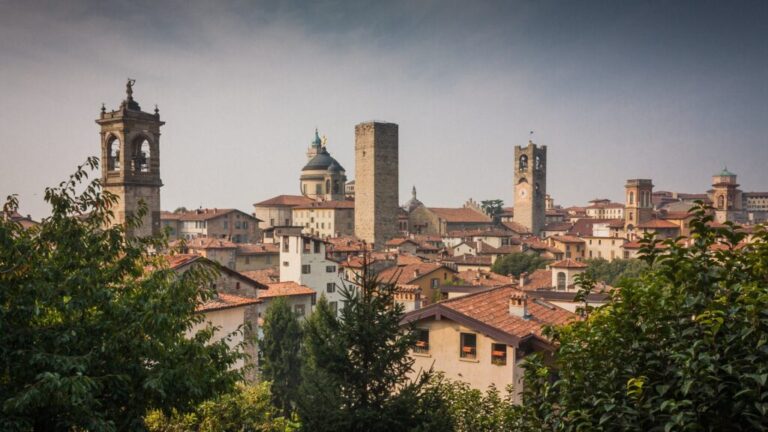 Fancy travelling back to 16th century Italy? Then follow these instructions.

First, visit the Royal Academy’s gripping exhibition of paintings by the forgotten Renaissance master Giovanni Battista Moroni, which opens in London on 25 October.

This done, spend a few days in Bergamo, the wonderfully preserved city in northern Italy where Moroni did much of his best work.

Let’s deal with the artist first. It is hardly surprising that his name has been eclipsed by such titanic near-contemporaries as Titian and Caravaggio. Yet his gifts, particularly as a portraitist, would have shone in any time or place. Neither meanly realist nor rollickingly mannerist, his paintings of aristocrats and artisans are truly magnificent.

After a glance, for instance, at the portrait of Gabriel de la Cueva (1560), you’ll want to know more about the subject. But you’ll feel you know quite a bit already. A short man, to judge by his head-body ratio, he glares pugnaciously out at posterity.

You get a similar feeling from the picture of Giovanni Gerolamo Grumelli, aka The Man in Pink, who is another angry nobleman. His sword’s at a tilt. His hand’s on its hilt. His cheeks match the blush of his doublet and hose, as if to say: ‘That’s right, they’re pink. You want to make something out of it?’

Wander the streets of Bergamo today, and you feel you might meet these characters on any cobbled corner. The town is a time capsule, all the more so because it hasn’t been over run by tourists.

The Città Alta (the higher, older part) floats above the rest like Arthur Conan Doyle’s plateau in The Lost World, protected from modernity by its thick defensive walls.

The town has money from the textiles and mechanical parts factories that surround the suburbs. It doesn’t need your dog-eared tourist euro.

What this means is that you will have a more authentic Italian experience than you could conceivably hope for among the touts of Florence, or the rapacious gondoliers who patrol the Venetian canals.

If you are staying in the lower town – as I did, in the friendly Best Western Cappello d’Oro hotel – you rise to the higher part in a funicular, and emerge into another age.

Nor are the Moronis, of which the town has many, the limit of Bergamo’s artistic repertoire.

Other highlights, as well as religious works by Moretto and Romanino, include an impeccable technicolour altarpiece by Lorenzo Lotto in the church of San Bernardino, and the same artist’s exquisite marquetry panels in the church of Santa Maria Maggiore, which glow as if in amber.

While you’re there, pay your respects to the tomb of Donizetti, a Bergamask native. If his operas are your thing, the nearby Teatro Donizetti stages them regularly.

Just one cornetto, though, won’t be enough for afters – particularly if you are indulging in the stracciatella at La Marianna restaurant, where the delicious ice-cream, flecked with splinters of dark chocolate, was invented.

The foodies among you (and the greedies, such as myself) won’t be disappointed by Bergamo.

Local specialities include fine cheeses (try the creamy taleggio) and casoncelli pasta, a kind of ravioli filled with meat and raisins, glazed with sage butter and draped with bacon. Round off this excess with a glass or two of fortified moscato di scanzo.

To sum up, Bergamo is, as it were, the Moroni among Italian towns: overlooked, undervalued, its treasures small but perfectly formed.

But with Ryanair flights from several UK airports to Milan Bergamo airport, a mere three miles or so from the town centre, there is no reason not to go.