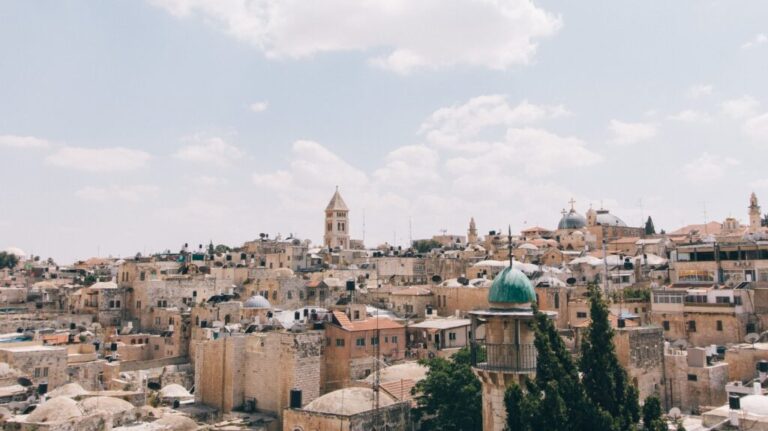 Want a reason to visit Israel? I’ll give you three.

The beaches, Jerusalem and the food.

The latter is incredible and comes in very large portions indeed.

We’re talking humungous mounds of hummus, amazing mezes, and fish so fat and fresh you half-expect them to leap up and slap you in the face.

Having flown in on easyJet’s inaugural flight from Gatwick to Tel Aviv, I have dinner in the unimpeachable beachside restaurant Manta Ray.

I plump for the filleted croaker and advise you to do the same. One of the great things about Israel’s second city is that wherever you stay, you’re usually within an easy stroll of the sea.

I’m couched in splendour in the Dan Hotel, my room overlooking a long, pale stretch of beach.

But if you want something less imperious, try the ancient city of Jaffa at the south end of the strand.

The Old Jaffa Hostel & Guesthouse has rooms from around £50 a night. And anyone up for sleeping under the stars can bed down on the roof for considerably less.

According to the Old Testament, it was from Jaffa that Jonah embarked on the voyage that saw him downgraded into the belly of a whale (biblical equivalent of economy class).

The place’s cultural heritage goes back further still, as I learn from my guide, Igal Zeevi.

Some rocks out to sea mark the spot where Andromeda, a local hottie, was saved from a drooling monster by the wing-footed Perseus, who instantly proposed.

In Israel, even Greek mythology gets a Jewish gloss.

You can see the rocks from a viewing platform near the Church of St Peter: a good spot, too, for looking back at the blistering high-rises and listed Bauhaus tenements of Tel Aviv.

I have a theory about modernist architecture, which is that most of it is best seen from a very long way away.

The same cannot be said of Jerusalem, which is shimmeringly gorgeous whether viewed up close or from afar.

An hour’s drive from Tel Aviv, the city sits, as Igal points out, at a crossroads between Asia, Africa, and Europe.

Not such a surprise, then, that it is sacred to all three of the major monotheistic religions.

As well as providing a setting for the denouement of the Christian story, it was the site of the Jews’ awesome Second Temple, which, occupying the hill called Temple Mount, took up about half the old city.

That hill now plays host to the Muslim Dome of the Rock, monument to the spot from which Mohammed took off on a winged horse named Buraq and flew to heaven and back in one night.

One of the weird things about visiting Jerusalem is that the location of many holy sites is hotly disputed. The Bible itself states that King David was buried in Bethlehem, and not, therefore, in the spot still revered by pilgrims as David’s Tomb.

Catholics believe the places where Christ was crucified and buried were both inside the Church of the Holy Sepulchre.

Many Protestants take a different view.

Wandering the narrow streets, you know it all happened somewhere around here. Whether you’re one of the faithful or one of the faithless, such as myself, it’s almost impossible not to be moved by the spectacle.

For some, perhaps, the belief in God may itself seem actually miraculous, and there’s nowhere better to witness it than the Wailing Wall.

The only remnant of the Second Temple (after the rest was razed by the Romans in 1AD), its sun-bleached stones tower over black-hatted Hasids praying alongside khaki-clad soldiers.

Men and women, young and old.

Following suit, you can tuck a scrap of paper, scrawled with your secret wish, into one of the wall’s nooks.

The smoothness of the limestone under your hand serves as testament to the numberless others who have pressed their palms to the wall over the centuries.

A day trip to Jerusalem won’t cover all its wonders, but it’s a decent start.

And you can be back in Tel Aviv in time to sample the famous nightlife. Seek out Solo to sip cocktails and people-watch – you may even spot Israeli model Bar Refaeli. Then try Passage (pronounced French-style, with the stress on the second syllable) for live music and a lower-key vibe.

Ease your hangover the next day on the soft sand of the city’s seemingly endless seafront. Is there any sound more soothing than small waves breaking on a beach?

When I was splashing around in early April, the water was as refreshing as ice cream.

One warning, though: it’s shallow.

So if you attempt, as I did, to emerge like Daniel Craig, you have to keep your torso clenched for quite a long time as you wade back in towards the shore.