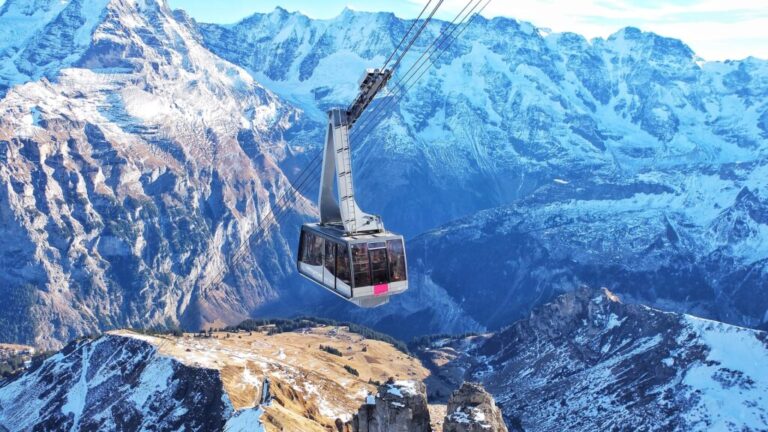 You don’t get many opportunities to mingle with sporting royalty, but one of them takes place next month in the fiendishly pretty Swiss ski resort of Murren.

The Murren Kandahar Races consist of three glittering days of events for skiers, snowboarders and telemarkers (free-heel skiing) of all ages and abilities.

Sign up and you’ll soon be learning from the likes of Adrian Perry, former member of the British telemark team, and the sprightly Karleen Jeffery, the two-times World Extreme Snowboard Champion, who now lives in Murren.

At last year’s event I fell in love with Karleen because she lied and said I was a ‘good’ snowboarder.

You can’t predict the snowfall in this age of haywire weather, but Murren is a good bet for early-season snow.

One highlight of my visit was descending from the top of the Schilthorn mountain, through fluffy, forgiving powder in the company of Stephen and Bernie Lunn.

It was their grandfather, Arnold Lunn, who put Murren on the map.

Back when only cross-country skiing was taken seriously by purists, Arnold invented the rules of slalom, and successfully lobbied for it to be included at the 1936 Winter Olympics.

At that contest, the British downhill team was captained by Arnold’s son Peter.

A fearless skier, Peter was also a Cold War hero — a real-life James Bond — a gentleman spy with a tough edge.

Bond fans are well-served in Murren, since the revolving Piz Gloria restaurant atop the Schilthorn was where On Her Majesty’s Secret Service was filmed.

In that movie, 007 was chased down the mountain, and almost overwhelmed by an avalanche deliberately triggered by his arch-enemy, Blofeld.

Seek out the isolated Suppenalprestaurant and they’ll do you a majestic cheese fondue, accompanied by a liqueur known as Alpenrossli tea.

The latter’s deceptively potent, as I realised while staggering and sliding downhill afterwards, beneath a star-spangled sky.

The next day, I took my sorry body off to Murren’s Sportzentrum and submitted to the rough but tender ministrations of a profoundly spiritual bald masseur named Satpremo, who bore a disturbing resemblance to Blofeld.     ‘The mind lies, but the body doesn’t,’ Satpremo murmured, as he kneaded my glutes.