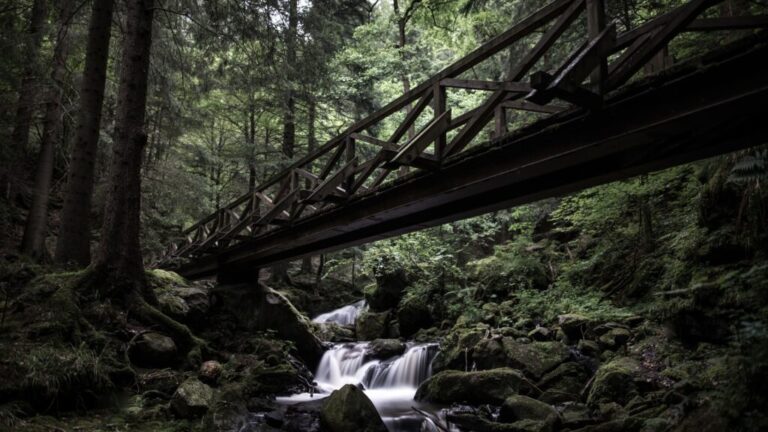 When Germany won the World Cup in 1990, it was considered a scandal if a jubilant child took a flag to school.

A change came when the country hosted Euro 2006. So much national pride swirled in with visiting fans from other countries that Germany felt perhaps it might be OK if, shyly, it unfurled the odd Bundesflagge here and there.

Yet even at last Sunday’s World Cup final, it was all very civilised. I was ensconced in a bar in the pretty spa town of Baden-Baden in Germany’s south-west corner, where the mood was rapt and finally enraptured as Mario Gotze hammered home the goal to dispatch Argentina.

Amid this tumult, I asked one fan — a bright-eyed blonde, her cheekbones smeared with Fanschminke (fan’s make-up) — what winning meant to her. She smiled and said: ‘Everything’.

Courteous of her even to answer a stranger, I thought. But courtesy is the keynote of Baden-Baden.

A little more than an hour’s drive from Stuttgart, this chic watering hole — with its wedding-cake houses, divided by the babbling progress of the Oos — was once patronised by Russian royalty, not to mention Dostoevsky, who wrote The Gambler here.

The reason for the double-naming is to distinguish it from other, less distinguished Badens.

There are two prestigious spas. One is mixed-sex nudist. And no, I didn’t dare. The other permits the timid bather to retain baggy trunks while braving the frigidarium.

The good cheer extended far beyond what might be expected in the World Cup afterglow. What was borne in on me, as I left Baden-Baden behind and drove deeper into the dark, lovely woods of the Black Forest, is that the Germans have many reasons for smiling.

Take Baiersbronn, for example. This is a village that claims the same number of triple-Michelin-starred restaurants as London (two) and throws in a two-star jobbie almost as an afterthought.

And you don’t, note, have to break the Bundesbank to get a decent meal, since the cuisine in the surrounding area has raised its game proportionately.

In the Forsthaus Auerhahn, where I was staying, the succulent medallions of venison came with home-made spaetzle (a bit like pasta), accompanied by tiny local mushrooms, which, in addition to being delicious, gave me what may possibly be my favourite word in any language. They’re known as pfifferlinge.

Baiersbronn perches by the Black Forest’s national park in the heart of Baden-Wurttemberg county. Writing about the hilly, wooded region 100 years ago, British humorist Jerome K. Jerome (another prominent name- doubler) refused to describe the landscape, saying he was haunted by the fear that readers were apt to skip those bits.

I’ll try. Massed conifers and white-barked birches. Small, round lakes dubbed ‘the dark eyes of the Black Forest’. The needles of firs bitten back by the auerhahn, a razor-beaked fowl whose call is like the creak of an oak.

What I want to say is that the scenery is special, a haven for hikers and cyclists.

This is thanks to a conservationist drive partly initiated in the 19th century by Dr Julius Euting, an eccentric nature-lover and professor of Oriental studies.

I visited his gravestone, carved with his name, that Dr Euting had erected (while very much alive) beside a well-trodden forest path.

It was his habit to hide behind it and eavesdrop on the comments of passers-by. Let no one say Germans can’t be funny.

Since World War II, we British haven’t felt inclined to hang out in Germany all that much. This is a terrible shame.

As well as spas, castles and forests, there’s the alcohol, of course. Fine, foaming beers, palate-scraping schnapps and the wine (the vineyards of the Vosges are mere miles away, across the border with France).

Home-grown vintages include ruddy Spitburgunders and Rieslings, the latter awaiting the thirsty hiker in the occasional ‘wine fountain’ by the trail — at €1 (80p) a glass.

Did I mention the menschen? A trip is made by the people you meet, and mine was wonderfully rounded by an evening with Meike and Bernhard, guide and boss of tourism at Freiburg. We talked not of football, but of the town’s history.     We chatted and we laughed and in all that time I never once heard another English voice. Now there, if you like, is definitely something to wave a flag about.